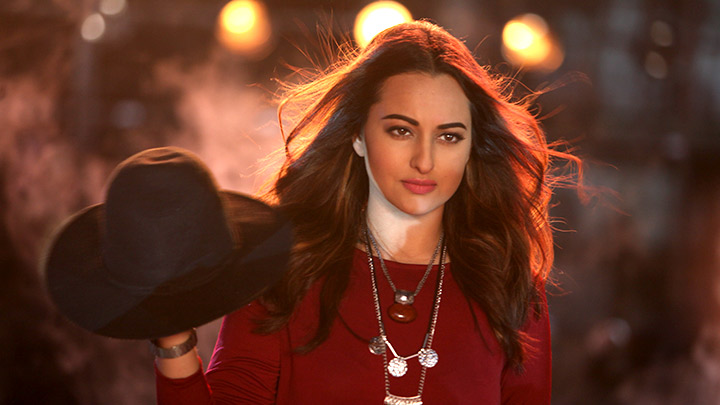 From a light hearted film which revolves around the life of a young woman who is a journalist and trying to find her true bearings, one expects a situational soundtrack. The good part about the album is the fact that there is a single composer (Amaal Mallik), which makes one believe that there would be a consistent sound right through. Manoj Muntashir and Kumaar write for a couple of songs apiece.

There is a breezy feel to the manner in which the title track of the film 'Uff Yeh Noor' begins. There is a 60s feel to the tune put together by Amaal and he gets complete support from his brother Armaan Malik who goes behind the mike and gets his joyous rendition in place. Manoj Muntashir does well in establishing the character of Noor (played by Sonakshi Sinha) by adding on good fun element to it that keep the smiles going. Expect the song to come right at the start of the film when the character of ‘Noor’ is introduced.

The moment you realize that Mohammed Rafi's 'Gulabi Aankhen' (R. D. Burman, Anand Bakshi) from Rajesh Khanna's The Train is reintroduced as ‘Gulabi 2.0’ (and later as ‘Gulabi Redux’), the first impression is that of disbelief. You wonder how exactly would a female version really fit. However, full credit to Amaal Mallik (both as composer as well as singer), lyricist Kumaar and singer Tulsi Kumar here for turning this one around upside down and actually coming up with a version that sticks by you. Except the hook-line, there is no similarity whatsoever and later when there is good support from Yash Narvekar, you truly dig on it.

Kumaar changes tracks with the next in line, 'Jise Kehte Pyaar Hai', and this time around, he writes a new age love song which has a sweet feel to it. A song which is about realization of true love, this one is also rendered well by Sukriti Kakar, who totally sings as per the character played by Sonakshi Sinha and never meanders. Moreover, Amaal does well in putting together a pleasant sound that should do well in the film.

The album concludes with a sad track, 'Hai Zaroori', which is about a heartbreak, what with a love story gone wrong. A kind of number that is expected to play in the second half of the film, what with the central protagonist realizing that her romance hasn't really gone as expected, this one is a situational outing. Though Prakriti Kakar sings this Manoj Muntashir written number well, it is basically for the film's narrative.

The music of Noor turns out to be largely breezy, what with good entertainment quotient coming in a small pack. A short-n-sweet album which does have a couple of hummable tunes and a good dance track, this one does well to fit into the mood and setting of the film.