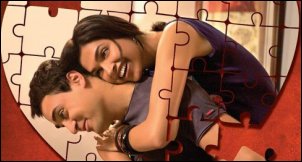 When it comes to vfx in heavy budget Bollywood movies, there are a few big vfx companies which has made its presence felt, over the past few years. But ever thought, a team of mere 5-6 guys hailing from Kolkata, in a small garage type studio, would able to execute vfx for big budgeted Imran Khan and Deepika Padukone starrer Break Ke Baad?

But yes. It is. Indranil Roy, who moved to Mumbai with couple of his team mates a few years back, running his own small animation boutique and executing a lot of TV commercials, has done it. "This is the first Bollywood feature film project which we have executed" says an excited Indranil, who also happens to be the vfx supervisor for the film.

Indranil started his boutique almost a decade back in Kolkata with the name N. K. Graphic Arts. "The company initially floated was in Kolkata for few years and then we planned to shift its base to Mumbai for better prospects. Though it was non-operational for almost a year and half, as I was a part of Prasad EFX, but now again we have started the studio as our priority"

When asked Indranil about his working experience in Bollywood and with the director Danish Aslam, he gave a very satisfied smile and replied, "Well, it has been a great learning and working experience. Danish is very well versed with his job and keeps a fair understanding about the vfx. He keeps sharp eye for the quality of content and is very particular about finesse of every shot executed."

As a new entrant in the industry, he is also thankful to Vicky Bahri, the Co-producer and Kunal Kohli, producer of the movie, for giving him an opportunity to work with them. "Vicky's and my relationship come from the time when we worked together for a TV commercial, a year back." he states.

He further informs that regarding the vfx and the shots, "There are more than 150 vfx shots of over 14 minutes which we executed. Having our team here in Mumbai, we also roped in few mates from Kolkata who accomplished the work."

Click on the below given tabs for the shot-by-shot breakdown: