Shah Rukh Khan is and will always be the King Of Romance. A true blue superstar that he is, it is not mere luck that he has millions of fans swooning over him. He sure enjoys a huge clout and fully deserves it. Unfortunately, he is not having a great run at box office currently but that has not deterred him from doing great work. He is currently doing Aanand L Rai’s movie Zero. It is an unconventional movie and we have never seen Shah Rukh in a role like this. It sure is a big gamble and a huge risk for the star but then, the movie has created a lot of buzz already. 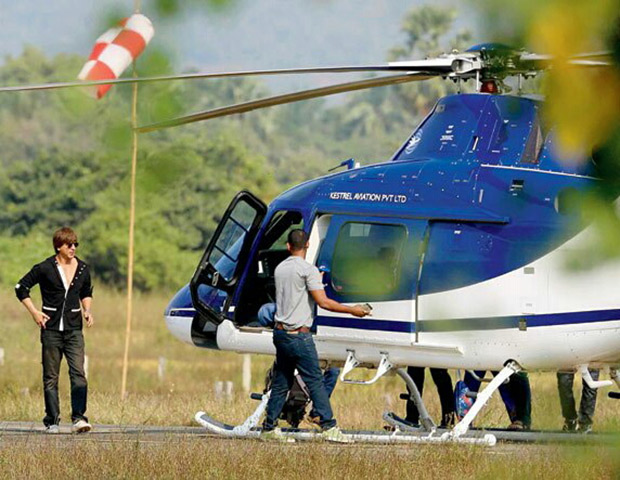 The latest update from the Zero film sets is that Shah Rukh Khan went to the quaint town of Vasai to shoot a part of the film. He reached Vasai in a chopper. Check out the pic and tell us if you love it. He is dressed in his trademark black shirt and chinos. The thing about Shah Rukh is that he manages to look suave even in the most casual clothes. Stay tuned on Bollywood Hungama for more updates on the movie. After Zero, the superstar will begin work on Salute, which is touted to be a biopic of an  astronaut Rakesh Sharma. His last release was Jab Harry Met Sejal directed by Imtiaz Ali.

Apart from Shah Rukh, his daughter Suhana too has been making news lately. She visited Taj Mahal with a few of her friends from London with mom Gauri. Pretty soon, we would see her on big screen soon.

Also Read : REVEALED: Shah Rukh Khan gets the rights of his film with Kamal Haasan and Rani Mukerji, Hey Ram