Last Updated 09.12.2022 | 2:12 PM IST
feedback language
follow us on
Bollywood Hungama » Movies » Movie Reviews » Zero Movie Review: Shah Rukh Khan's Zero has several factors going for it; but sadly, the weak, flawed and lacklustre screenwriting is all that you recall. This one’s an epic disappointment!

Zero Movie Review: Shah Rukh Khan's Zero has several factors going for it but sadly, the weak, flawed and lacklustre screenwriting is all that you recall. This one’s an epic disappointment.

ZERO is a crucial film for varied reasons. The main reason being, it’s the first collaboration of Shah Rukh Khan and Aanand L Rai, who has a hat trick of hits to his credit [TANU WEDS MANU, RAANJHANAA and TANU WEDS MANU RETURNS]. 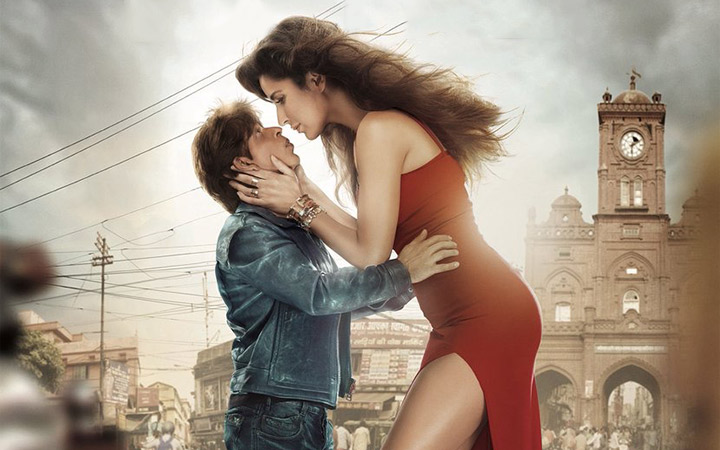 Unlike their previous ventures, the stakes are high this time. The actor features in a role he hasn’t portrayed earlier, while a significant part of the second half has space travel interwoven in its screenplay. Naturally, the expectations are colossal.

Without giving away the minutest details of the story, here’s the spoiler-free plot: Bauua [Shah Rukh], a 38-year-old man, lives with his family in Meerut. He comes across the profile of Aafia [Anushka Sharma] at a marriage bureau and decides to woo her.

Aafia doesn’t show interest in Bauua initially, but falls in love with him subsequently. Bauua backs off. A few months later, Bauua is shocked to see Aafia at his residence.

Bauua’s father [Tigmanshu Dhulia] decides to get Bauua and Aafia married and a reluctant Bauua agrees too. Meanwhile, Bauua had signed up for a dance competition where the winner will get to meet the superstar, Babita [Katrina Kaif].

An ardent fan of Babita, Bauua ditches Aafia on the day of marriage. What happens next, forms the remainder of the film.

To begin with, the story [Himanshu Sharma] hinges on a wafer thin plot. The writer has integrated space travel in the narrative and you may argue [and rightly so] that it’s this aspect that drives the story away from predictability. However, the writer fails to knit a compelling, riveting and captivating screenplay that stays with you.

ZERO appeals in bits and spurts and a few moments in the first half do grab your attention, make you giggle and bring a smile on your face. A few individualistic sequences do catch your attention, but you realise, as the narrative progresses, there’s something amiss.

You invest hopes in the post intermission portions, hoping that the writing and the emotional quotient - the hallmark of Aanand’s previous movies - will change the scenario for better. Unfortunately, the writing goes for a toss as the fun portions fall flat, romance seems superficial and emotions appear fake.

What saves ZERO, besides the performances of its principal cast, are some sharp and witty lines. But the bitter truth is, great lines or individualistic sequences in a disjointed screenplay are forgotten once you exit the theatre.

Aanand L. Rai’s direction is a far cry from his previous works. In fact, the incredibly talented storyteller is known to make you smile, laugh and make you moist-eyed in his well-packaged movies. Everyone who recalls his works will be wondering, how did he okay a half-baked screenplay this time? Too many questions cross your mind as the drama unfolds and you soon realise, it’s a screenplay of convenience.

The graph of the film goes haywire in the second hour. Generally, you don’t complain about the length of the film / run time if the proceedings and sequence of events keep you hooked, enthralled and mesmerised. Sadly, ZERO lacks the power of a strong and cohesive script.

Ajay-Atul's soundtrack is a big plus. ‘Mere Naam Tu' is, undoubtedly, the best track. The song featuring Salman and SRK is a treat for the fans of the two superstars. Cinematography is brilliant. The DOP captures the various moods and locales to perfection. The production design is top notch. A special mention of the VFX, which matches the global standards.

Shah Rukh is the lifeline of ZERO. He is in supreme form. The actor deserves 10/10 for a performance that’s absolutely fantastic. Anushka nails the part. There’s no doubt that she’s amongst the best and her act in ZERO reiterates the fact. Katrina surprises you with a stunning performance. Some moments in the second half give her ample scope to shine.

On the whole, ZERO has several factors going for it: star presence, winsome performances, energetic soundtrack and of course, it’s timed during the Christmas and New Year vacations. Sadly, the weak, flawed and lacklustre screenwriting is all that you recall after you’ve watched the much-awaited movie. This one’s an epic disappointment!

EXCLUSIVE: Lilliput explains why Shah Rukh Khan should not have played a dwarf in Zero

Published on May 14, 2019 10:33 AM IST
Bollywood Hungama News Network https://www.bollywoodhungama.com/

The concept of the film is amazing. Its a journey of a vertically challenged person from Meerut to…

How can a story be written so badly. Mohammed zeeshan such a talented actor and they made him a…