Hollywood may have come and invaded the Indian screens all over, what with superhero flick Avengers: Endgame creating mayhem at the Box Office. However closer home even Bollywood has seen its own superheroes ensuring that the audiences who love to watch Hindi films are engaged, entertained and excited enough. 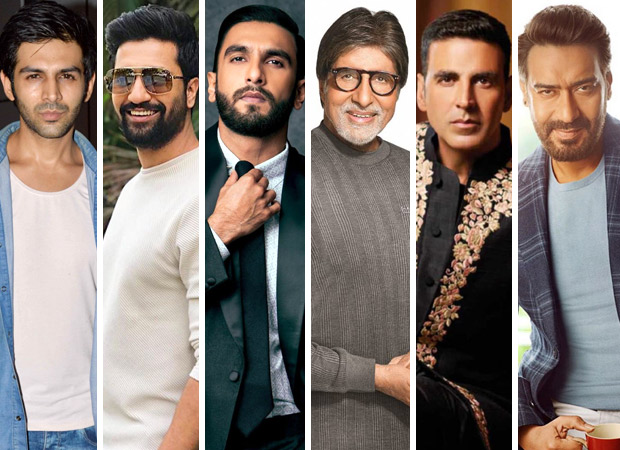 The new kid on the block who started quite young and has now found stardom at just the right age, Kartik Aaryan has been resurrected in the last couple of years. A biggie solo like Luka Chuppi is a testimony of that, the film which came quite close to the Rs. 100 Crore Club. The youngster has got into the habit of superhits and blockbusters, what with his Sonu Ke Titu Ki Sweety entering the Rs. 100 Crore Club and Pyaar Ka Punchnama 2 being a good success as well. Now there are expectations of a lot more, courtesy upcoming films like Pati Patni aur Woh and Imtiaz Ali's next.

It was a rather subtle beginning for Vicky Kaushal, though he caught critics’ attention with Masaan. However, it is Uri - The Surgical Strike that has got him into the map of emerging stars. The 30 years old actor is finding good bearings in the industry and one now waits to see how he capitalizes on the platform that he has set for himself. Currently, he is shooting for his horror film and post that he would be seen in ensemble affair Takht which has Karan Johar returning to direction after Ae Dil Hai Mushkil.

A superstar in his own right with several superhits and blockbusters behind him, Ranveer Singh has been around for nine years now and is firmly placed amongst the top superstars of Bollywood. His latest release Gully Boy was a rather niche affair and still managed to enter the Rs. 100 Crore Club. There is so much that the actor brings on the table and is a delight to watch. No wonder, whether it is Simmba or Padmaavat, he entertained big time last year. He is currently busy with Kabir Khan's '83 and post that he would begin shooting for period drama Takht.

Amitabh Bachchan is not called a living legend for no reason. He is 76 years old and still setting records. Earlier his Piku had enjoyed a lifetime of 80 crores. Now his Badla has not just completed 50 days at the Box Office, it had also come close to the Rs. 90 crores mark. In the coming months, one waits to see Big B enjoying a Rs. 100 Crore Club film of his own, what with Jhund, an untitled film with Emraan Hashmi and Brahmastra in the pipeline.

'Saath saal ke boodhe ya saath saal ke jawaan' - A popular ad had this as a tagline a few decades back. Guess it was pretty much coined for Anil Kapoor who is looking smarter and more handsome than ever before. He was in comic form in Total Dhamaal this year which set a personal record for him, what with the film going past the Rs. 150 crore mark in quick time. Wow! His stint with family drama Ek Ladki Ko Dekha Toh Aisa Laga couldn't entice audience but rest assured, Paagalpanti would have audiences rooting for him. Before that he would also be seen in Malang.

Age is not even a number for Akshay Kumar, what with the superstar going back in time with every passing year. As for the records, newer ones are being created at an alarming pace as well. Surpassing the lifetime numbers of Toilet - Ek Prem Katha, his latest release Kesari has now crossed Rs. 150 crore mark and is still counting. It is just a matter of time for Rs. 200 Crore Club. After all, there is a plethora of releases lined up already in the form of Mission Mangal, Housefull 4, Good News, Sooryavanshi and Laaxmi Bomb. Phew!

Ajay Devgn and Akshay Kumar started their career around the same time. They both have similar work and personal philosophies as well. The superstar has been juggling genres at a rapid pace and after delivering a Rs. 100 Crore Club success Raid last year; he demonstrated his funny bone with Total Dhamaal, a Rs. 150 Crore Club film, this year. The actor is enjoying a great phase and has a variety of upcoming releases like De De Pyaar De, Tanhaji: The Unsung Warrior, Bhuj-The Pride of India, RRR, Luv Ranjan's next and Amit Sharma's next.

Also Read: BREAKING! Vicky Kaushal roped in to play this valiant Mahabharata character in a film by Uri director (read ALL details)