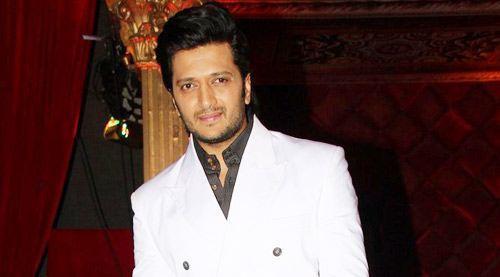 He was last seen in back to back blockbusters - Marathi film Lai Bhaari (which he also produced) and Hindi film Ek Villain (where he played the antagonist). Both films went on to set records and though Riteish did make a guest appearance in Entertainment (which released exactly a year back on 8th August); he has been largely off the big screen. He is returning to theaters this week with Bangistan, a satire, and it is expected that the funny side of Riteish Deshmukh would be on play all over again. Since the film deals with the theme of terrorism in a satirical way, one waits to see how the overall narrative is handled.

This is the longest break ever for a film starring you to hit the screens. You were being missed, especially after delivering two back to back successes.

It so happened that we were supposed to come with Bangistan in February this year. However, so many times a film gets a little pushed due to date combinations and all. We all thought that chalo, since we have started off, well; let's give the film a right release now. We thought that was okay. Koyi jaldi nahi thi. It is for the better. When you are doing movies then release toh honi hi hai in any case (smiles).

Even though Bangistan is a comic film, it is in true terms different, right?

Karan Anshuman's sensibilities make that possible. Also, the fact that it is an Excel production helps. They put their head and heart into their films.

When Bangistan actually came to you, was there an instant connect for you with the subject, considering the fact that terror is being explored? Did you ever have any apprehension?

No, there was never any apprehension. Point yeh tha ki aap bataana kya chahte ho. We were sure about what we wanted to portray.

Since you are a hardcore mainstream actor, did you actually share tips with Karan on what needed to bring on wholesome entertainment on screen?

It was not about Karan trying to adapt to me; it was about me trying to adapt to him. I have been associated with films that are massier, be it Masti, Housefull, Dhamaal or Kya Kool... franchises. I wanted to a different kind of film and indulge in different kind of humour. When you sign a particular film, you know the direction that you are getting into. I am doing Housefull 3 next and I know where I am heading for. Same for Great Grand Masti. When you do a newer kind of subject like Bangistan, you know the kind of targets and benchmarks that are being set.