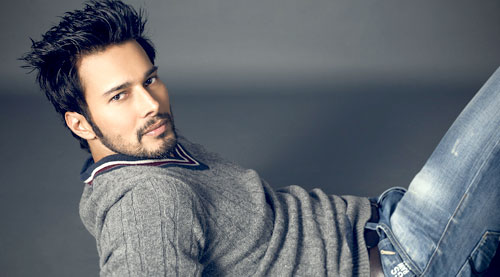 Ek Paheli Leela is seeing some good buzz rolling around itself and while Sunny Leone is certainly the sizzling element in the reincarnation drama, one man who links the story between past and present is Rajniesh Duggall. Though he is not revealing much about his part which may or may not have an appearance in both eras (the Bobby Khan film is set in current times and then goes back 300 years into the past), the fact remains that this production of Bhushan Kumar and Ahmed Khan is being keenly awaited en route its April release. And now, we get a little chatty with Rajniesh 'Khatron Ke Khiladi' Duggall.


You have quite a few other men for company as well in the film, be it Jay Bhanushali, Rahul Dev or Mohit Ahlawat. Ever wondered about the screen space you would enjoy amidst them all?

No, not at all. When I heard the role, I knew it was superb. I had to mainly concentrate on getting the look and dialect right. In the film, I am supposed to be seen in bare body with dhoti and all. So for that I needed to have the right body and skin tone to go with the look of that period. In fact, to get the feel of the era correctly, I even decided to be bare foot, even though it was 50 degrees hot. Coming back to the four us male leads then well, none of us carried that kind of thing in our mind at all. There was this 0% doubt about how our roles would be distributed. At the end of the day the script is a winner.


How does the performance quotient play on?

Of course there is huge platform to perform in the film. I play a Rajasthani guy, which is new for me. I in fact went to the location a few days in advance to seep in the milieu and ambience. This was a place near Jodhpur where we put up an entire village set. It was unbelievable to have this around sand dunes of a five star resort where we also got a water body and oasis. We were shooting at a temperature of 50 degrees alongside a very hot Sunny Leone (laughs). This is a kind of place where heat gets on to everyone. We had people falling all around us. Kabhi do, kabhi teen, kabhi chaar - idhar udhar sab gir rahe they.


Talking about milieu and ambience, the film does look big; in fact bigger than any film that Sunny has done in the past.

Well, everyone has worked together on the script to make it a big film. Yes, there are elements that would help us get the opening but after that, the word of mouth would do the trick for us. Film has that kind of capacity. We have shot the film on very lavish sets. Kabhi bhi shooting ke time aisa nahi tha that chalo yaar bass shoot kar lete hain. We never thought that is scene ko patchwork mein complete kar lenge. Ya chalo aaj aaye hain toh ek scene nikaal dete hain. We took our time to shoot it well. Based on whatever I have seen and the story that I know of, the film will go way beyond in its run at the box office.