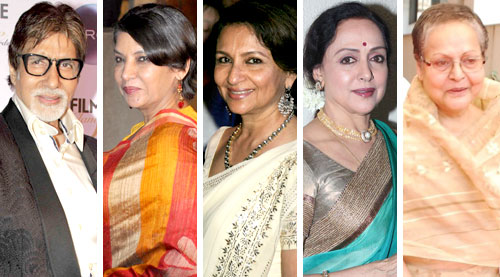 Amitabh Bachchan (co-star in numerous films including Deewaar, Trishul and Kabhi Kabhie): "It's a most deserving honour."


Shabana Azmi (co-star in Junoon, Fakira): "It is fantastic news! I am over the moon! He has been a trailblazer in so many ways. He was the first Indian actor to work in Hollywood. He was the first mainstream actor who when he turned producer did so with artistic cinema like 36 Chowringhee Lane and Junoon. He is a dream producer. He has built an institution, Prithvi Theatre which has given Mumbai a cultural space like no other. All that he earned he gave back to the world of art. He didn't become a real-estate dealer or pumped his money into stocks and shares. My congratulations to Shashiji."


Sharmila Tagore (co-star in Waqt, Paap Aur Punya, My Love, Aa Gale Lag Jaa, Anari): "I am very happy for Shashi. His work as an actor and then as a producer of important off-mainstream cinema makes him unique. He was the first Indian actor to work abroad, and that too with an eminent director like James Ivory. Together they did exemplary work. Shashi worked really hard to achieve what he did as an actor and producer. He is an exceptionally soft-spoken co-star and also a very considerate team player on the sets. He is very kind to all the technicians. He has generated tremendous goodwill in cinema and theatre. He is an extraordinarily versatile artiste."


Hema Malini (co-star in Abhinetri, Jahan Pyar Miley, Naach Uthe Sansaar, Trishul, Do Aur Do Paanch): "It is wonderful news. I am genuinely happy for him."


Raakhee Gulzar (co-star in Sharmilee, Kabhi Kabhie and Trishna): "He has been neglected for too long. This award is richly deserved."