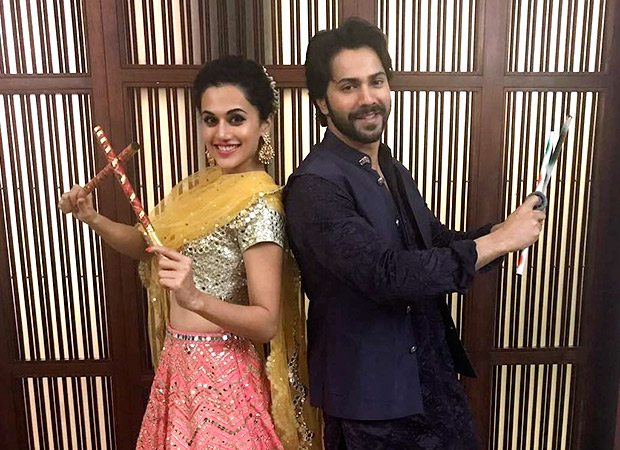 Varun Dhawan, Taapsee Pannu, and Jacqueline Fernandez are promoting their upcoming comedy film, Judwaa 2, in full swing. The trio has been traveling to several cities for the promotions. Varun Dhawan is starring in a double role for the first time as Prem and Raja. With the movie releasing on Friday, the hype around the film is just increasing.

Taking their promotional tour to Ahmedabad, Varun Dhawan and Taapsee Pannu took the desi route to enjoy the Navratri festivities in the city. They attended the grand Navratri pandal in the city where they grooved to 'Sanedo' and enjoyed the garba and dandiya raas. Varun donned an all black avatar with a jacket whereas Taapsee opted for a shimmery lehenga.

Not only did they dance on Gujarati songs, Varun and Taapsee also made the crowd dance on 'Oonchi Hai Building 2.0'. As the crowd went crazy listening to the music, the duo danced on the song and the crowd cheered for them. Taapsee shared the video with a caption that read, "Kaise!!!! Kaise we can't go mad on this song specially on a dandiya night!!! @varundvn #Judwaa2 #DandiyaNight #MirchiRockAndDhol."