B- Town has always welcomed star kids with open arms. It is once again ready to welcome another set of star kids this year with Karan Johar’s upcoming production, Dhadak. The film marks the debut of late actress Sridevi and Boney Kapoor’s daughter Janhvi Kapoor. It also stars newbie Ishaan Khatter who is Shahid Kapoor’s brother. As the duo’s trailer released earlier this month, the fresh pair is pretty stoked to see the audience’s reaction to the Sairat adaptation. The title track released on June 20 which showcased the flirtatious chemistry between the two actors. Now, the recreated version of foot tapping number 'Zingaat' will be released on June 27. 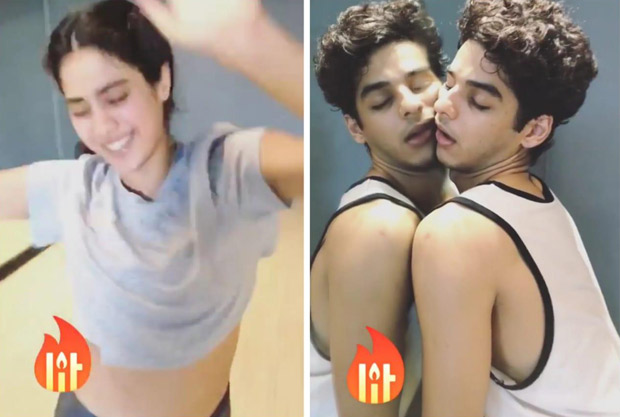 As Dhadak stars have begun promotions, they are super pumped about the official release of 'Zingaat'. The original song featured Marathi actors Akash Thosar and Rinku Rajguru which become a blockbuster number. Since this is a recreation in Hindi by the original composers Ajay - Atul, the essence, and composition have been retained. From the trailer, the song looked refreshing and the fans are excited are excited to see the new version. Just like the fans, Janhvi Kapoor and Ishaan Khatter are also excited about the release. Sharing a goofy yet terrific video from the rehearsals days, Janhvi and Ishaan are seen grooving on the dance number. The sneak peek itself is fiery and their chemistry looks perfect.

A day ago, the makers released a video of the two of them from the sets of the film. In the video, they talk about what they like and dislike about each other in their funny banter. Ishaan calls Janhvi ‘ungli’ whereas Janhvi had no words to compliment him. She said that he shatters her brain cells with his unreal singing as they continue their banter. Ishaan is even seen troubling his director Shashank Khaitan. It seemed like the lead pair had a gala time filming this movie.

The original film, Sairat, starred Rinku Rajguru and Akash Thosar and was helmed by Nagraj Manjule. Dhadak is produced by Dharma Productions and is directed by Shashank Khaitan. It follows the story of Madhukar and Parthavi and their fierce and unconditional love that fights fate. But as their love grew, so did their problems as their families reject their love. Dhadak also stars Ashutosh Rana and is slated to release on July 20, 2018.

Super pumped @janhvikapoor and @ishaan95 give a sneak peek of #Zingaat which comes out tomorrow. #Dhadak @dharmamovies @zeestudiosofficial