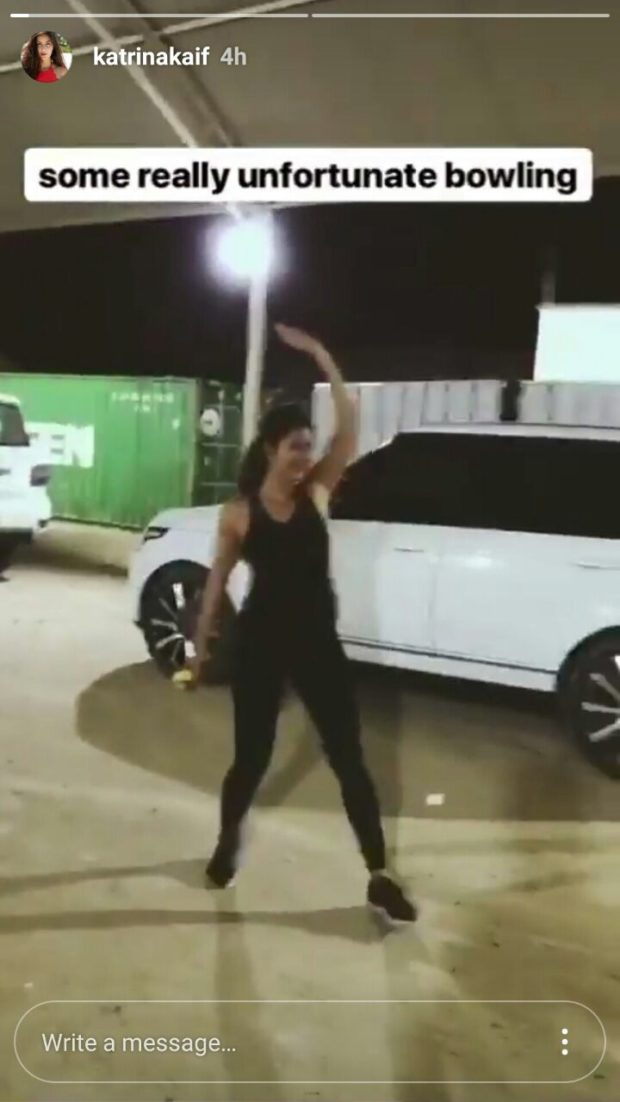 Readers may be aware that Katrina Kaif along with Salman Khan and the rest of the team of Tiger Zinda Hai are currently in Abu Dhabi shooting for the film. The unit is wrapping up their 50 day long schedule and while it is all work for them for most of the day, the team also enjoys their breaks quite enthusiastically, rather sportingly.

From what we hear, the cast and crew indulge in a game of gully cricket almost every day and giving a sneak peek into their game was the leading lady of Tiger Zinda Hai on her social media handle. Katrina Kaif shared this video as an Instagram story of her playing cricket with the rest of team, wherein we saw her essay the role of a bowler. After her, it was yet another actor of the film Angad Bedi who got a chance to bowl. Katrina had captioned the video saying, ‘some really unfortunate bowling’ referring to her cricket skills.

On the other hand, reports have it that Katrina Kaif has been keen on learning cricket. A source close to the unit said, “Katrina has been enjoying playing cricket and learning more about it. Angad being a cricketer himself along with Katrina and others from the sets are spending time playing cricket after wrap up almost every day. It's almost become a ritual for them. Now they in fact plan to play it every day till the wrap up of the shoot end of this month. Katrina has really grown fond for the game.” Let us remind you that Angad Bedi is the son of legendary Indian cricketer Bishan Singh Bedi.

Talking about Tiger Zinda Hai, the film will bring back the popular on screen pair of Salman Khan and Katrina Kaif after their previous outing Ek Tha Tiger. Angad Bedi will be seen in a prominent role in the film and he recently joined the cast in Abu Dhabi to wrap his schedule for the film. As for the film itself, it will start off from where the prequel had ended. Directed by Ali Abbas Zafar, the film is slated to hit the silver screen by the end of this year.