Tiger Zinda Hai Movie Review: Begins on an engaging note with clapworthy sequences Tiger Zinda Hai is a highoctane masala entertainer that stays true to its genre and delivers what it promises. . 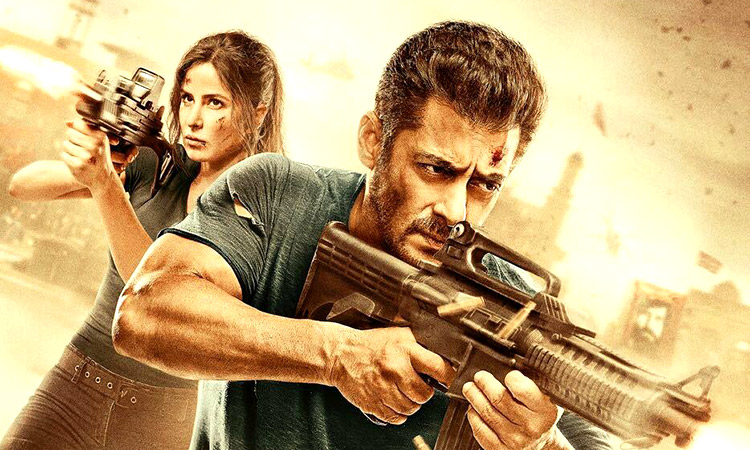 The festive season and the year-end is around the corner and it’s usually a time when a big, event film hits the theatres. This year it’s the turn of Salman Khan and Katrina Kaif starrer TIGER ZINDA HAI and it has a lot of factors going in its favour. Apart from being the sequel of the blockbuster EK THA TIGER [2012], the film boasts of an excellent star cast, slick, action-packed trailer and chartbuster music. So does the year end on a high with TIGER ZINDA HAI? Or does the film disappoint? Let’s analyse.

TIGER ZINDA HAI is the story of an Indian and Pakistani spy coming together for a greater cause. Tiger (Salman Khan) and Zoya (Katrina Kaif) escape from the clutches of ISI and RAW and then they start living an idyllic life somewhere in the snow-covered ranges of Europe. Meanwhile in Ikrit, Iraq, Abu Usman (Sajjad Delafrooz) emerges as the head of ISC which turns into the world’s richest and the most dangerous terrorist organization. The Americans are angry and they launch an attack on Abu and his convoy, and it injures Abu. At the same time, a group of 40 nurses – 25 Indian and 15 Pakistani – are heading to the hospital where they work. Abu’s men force the nurses to take an injured Abu with them for immediate treatment. They also take over the hospital and keep the nurses as hostage. The Americans then decide to launch an airstrike on the hospital within 7 days. Hence, the Indians have just a week to rescue the nurses. Infiltrating into the high security ISC region is next to impossible. The senior officer of RAW, Shenoy (Girish Karnad) suggests that Tiger should be called in as he’s the only one who can successfully complete this mission. Tiger is found and he takes up the job. How Tiger manages to infiltrate the ISC area and rescue the nurses forms the rest of the film.

TIGER ZINDA HAI begins on an engaging note with the sequence of James Forward (Tyler Gowardhan). It very well establishes the terror unleashed by Abu Usman. Tiger’s entry as expected is clapworthy and will be greeted with seetis and taalis. The entire wolf sequence is akin to international standards and it truly makes you feel that Hindi cinema has indeed come of age. An unexpected bit in the film is of the marital problems faced by Tiger and Zoya. Of course, the fun enhances once Tiger reaches Iraq and makes a plan to get to the hospital. The introduction of Firdaus (Paresh Rawal) adds to the fun. The market sequence before the intermission point is quite extended but also highly entertaining. The fun continues in the second half but the pace drops a bit here. Also, the film gets a bit unconvincing which could have been avoided. Tiger and his team didn’t seem that injured that they had to be rushed to the hospital – they could have been easily treated in the refinery itself. Perhaps the makers should have shown them extremely wounded maybe. Moreover, the manner in which Zoya and Firdous convince the Americans to side with them and also Zoya commanding the Americans is difficult to digest. The narrative gets scattered in the middle, however the film picks pace in the last 30 minutes. But thankfully, the positive outweigh the negatives easily. The climax is again quite lengthy but it’s brilliantly done and gives audiences their money’s worth.

Neelesh Misra and Ali Abbas Zafar’s story is a great blend of emotions, action, romance, humour and also patriotism. At the same time, it serves as a nice, organic sequel to EK THA TIGER and that’s definitely praiseworthy. Ali Abbas Zafar’s screenplay is highly engaging. Ali Abbas Zafar’s dialogues are simple but highly effective. The English dialogues are used at a lot of places but again, these are simple ones and the scenes are scripted and directed in such a way that even if one doesn’t understand English well or reads the subtitles, one can still comprehend what’s going on. Ali Abbas Zafar’s direction has a mass appeal and at the same time, he ensures that the film looks like a class product. He establishes the world and characters in no time and gets going with the story instantly. The romantic bit between Tiger and Zoya is also well depicted. One of the most interesting aspects is the entire India-Pakistan angle and it’s sure to leave audiences smiling and even in tears at some places. A very brilliant message of peace is given in this flick and that’s sure to be appreciated!

Talking of performances, Salman Khan delivers a terrific performance yet again. Salman is the lifeline, the real treasure of Tiger Zinda Hai. He sinks his teeth into the character and, in several sequences, peels off the mask of superstardom and brings the actor to the fore. At many places, he underplays his part which goes very well with his spy act. Also, his interaction with his family is a delight to watch. Salman disappointed audiences in TUBELIGHT but in TIGER ZINDA HAI, he compensates for it very well and audiences are sure to enjoy his performance. Katrina Kaif thankfully is not an arm candy. She has a very crucial part and even she gets to be a part of clapworthy action scenes! She looks like a million bucks in the song ‘Dil Diyan Gallan’ and also seems quite cool in the action avatar. Sajjad Delafrooz pitches in a remarkable performance and plays his villainous part very well. The film would not have been half as successful if he had given a shaky performance. His face, body language and poise give a clear message that he means business. Watch his confrontations with Salman - the good versus evil clash is truly brilliant. Paresh Rawal is terrific and he’s sure to be remembered for a long time for his performance. He also contributes to the laughter quotient. Angad Bedi (Navin) is fine and shows his worth in the climax scene. Kumud Mishra (Rakesh) essays an interesting character with élan. Paresh Pahuja (Azaan Akbar) leaves a mark despite lesser screen time. Child actors Jineet Rath (Hassan) and Sartaaj Kakkar (Junior) have important parts to play and do very well. Girish Karnad is as usual while Anant Vidhaat (Karan), who did a good job in SULTAN, gives a credible performance. Anupriya Goenkar (Poorna) gets the most scope among the nurses and she shines. The rest of the characters do a fine job.

Tiger Zinda Hai has several strengths: An engaging storyline as well as an enthralling screenplay that’s powered with clap-trap dialogue.

Vishal-Shekhar’s music is melodious and well woven into the script. ‘Dil Diyan Gallan’ is very sweet and endearing. ‘Tera Noor’ is the best picturized song of the film and it’s great that such a song is used in such a contrasting situation. ‘Swag Se Swagat’ is a chartbuster and played in the end credits. ‘Zinda Hai’ and ‘Daata Tu’ are missing from the film but no complaints! Julius Packiam’s background score is dramatic and exhilarating and raises the tempo of the film.

Marcin Laskawiec’s cinematography is captivating and gives the film an international feel. Rameshwar S Bhagat’s editing is simple and at places, slick. Tom Struthers’s action is not too gory and would be loved by the masses. Rajnish Hedao’s production design is very authentic. Same goes for YFX’s VFX (Yash Raj Films' VFX department) – it will serve as a benchmark for Indian films from now on! Alvira Khan Agnihotri, Ashley Rebello and Leepakshi Ellawadi’s costumes are also quite real and very well researched.

On the whole, TIGER ZINDA HAI is a high-octane masala entertainer that stays true to its genre and delivers what it promises: King-sized entertainment. At the box office, the audiences will give the film an epic ‘swagat’ as it is bound to entertain them thoroughly. This one is a SURE SHOT BLOCKBUSTER and nothing can stop it from setting new records. Get ready for the Tsunami at the Box Office.

Tiger Box Office Collections (Domestic): A look at how the Salman Khan starrer Tiger series has performed till date

4 Years of Tiger Zinda Hai: “It's important to know people beyond their religion” - Sajjad Delafrooz