One of the most awaited films of 2018 is Thugs of Hindostan which is a huge film starring Amitabh Bachchan, Aamir Khan, Katrina Kaif and Fatima Sana Shaikh. As the film is touted to be made on a big scale, the cast and crew are leaving no stone unturned in the shooting of the film. 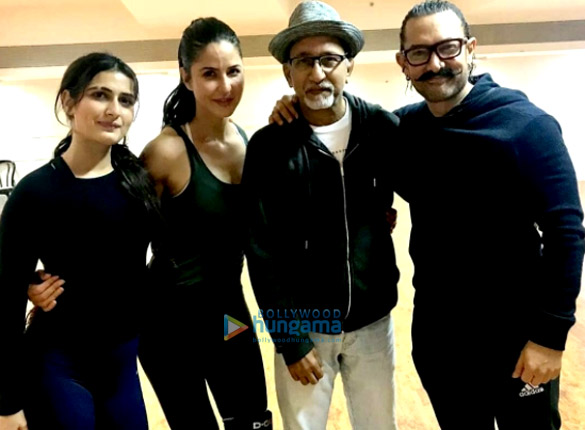 Just a day ago, the lead actors Aamir Khan, Katrina Kaif and Fatima Sana Shaikh were seen getting some dance rehearsals done for the title track. We came across a group picture featuring the trio along with their director Vijay Krishna Acharya. Dressed in gym gear and sweats, they looked pretty excited rehearsing for the song.

In one of the videos shared by Katrina Kaif on her Instagram stories, she is seen rehearsing some dance moves while Aamir Khan is sitting on the ground. She shared a couple of videos in slow motion as they continued their work.

Thugs of Hindostan is the second outing of Aamir Khan, Katrina Kaif, and Vijay Krishna Acharya after Dhoom 3. This also happens to be the second collaboration between Fatima Sana Shaikh and Aamir post their blockbuster film Dangal. In the film, the biopic on Mahavir Singh Phogat and his daughters, she played Aamir’s daughter Geeta Phogat.

As for this film, Thugs of Hindostan is slated to release on November 7, 2018.