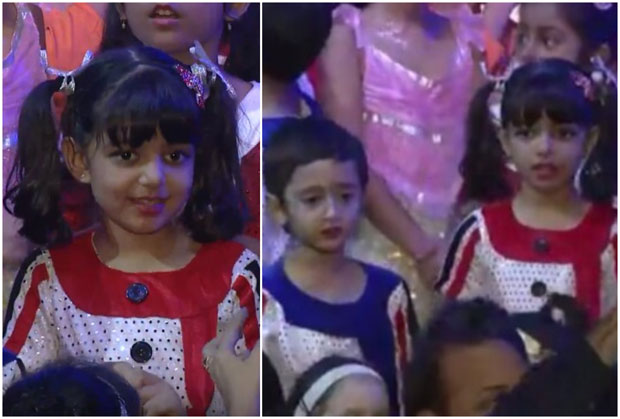 One of the kids performing was Aishwarya Rai Bachchan and Abhishek Bachchan's 6-year-old daughter, Aaradhya Bachchan. Performing at the front, Aaradhya looked like a star performer as she took to the stage performing on ‘I won’t give up, I won’t give in’, along with other kids. Aishwarya and Abhishek were beaming with pride as Aaradhya continued to enjoy her performance. She looked super cute in white frill frock with red leggings.

Abhishek Bachchan's mom Jaya Bachchan and Aishwarya Rai Bachchan's mom Brinda Rai were present to see her granddaughter perform. Only Amitabh Bachchan was missing from the event as he was shooting in Thailand with Aamir Khan for Thugs of Hindostan.

Post the annual day, the entire the auditorium was enjoying the closing ceremony including Aaradhya Bachchan and Aamir Khan's son Azad Rao Khan. The two of them are close friends and were definitely grooving the beats of the song 'Badri Ki Dulhania' from the film Badrinath Ki Dulhania.