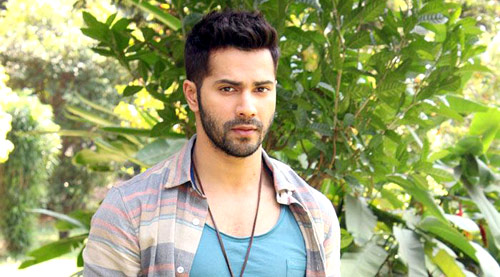 In Badlapur Varun Dhawan plays a real-life criminal from Central Europe who went on a vendetta spree after his wife was murdered.


In his next film too Varun plays a real-life character. You might see Varun Dhawan spending a lot of time these days with a young dancer named Suresh from Nala Sopara.


Varun plays Suresh in Remo D'Souza's ABCD 2. The aspirational dance film is based on the true-life story of 4 boys Rohit, Pavan, Suresh and Vernon who are part of a dance institute named Fictitious Dance Academy.


Varun plays one of the dancers named Suresh. Even more interestingly, Suresh whom Varun Dhawan plays also has a role in ABCD 2.


Revealing these details Remo says, "I thought I had exhausted my appetite for a dance film when I made ABCD. But then I came across the real-life story of these boys from Nala Sopara who went all the way from their home town to win a dance show in Las Vegas, I knew I had to tell their story. Four of the boys Pavan, Rohit, Vernon and Suresh are in the cast of ABCD 2. And yes, Varun plays Suresh."


Varun, a redoubtable dancer, has spent time with Suresh to understand the mind of a dancing wizard who had the guts to dream of the sky.


Says Remo, "I chose Varun because I needed someone who could dance. And I mean, REALLY dance. I also needed a very good actor since the character's journey is not only about dancing but also his aspirations and dreams. It wouldn't have been enough for my protagonist to simply be a fabulous dancer, like Suresh. The actor also had to express Suresh's feelings. Varun is both a dancer and an actor. I am convinced he will bring Suresh to life.... He had better, since the real Suresh is also in the film."


Explaining his caste profile Remo says, "I am asked, why Shraddha Kapoor in a dance film, as we've never seen her dance in any of her films so far. I just felt Shraddha has great grace and enormous fluidity in her body language. And I was right. Shraddha is a fabulous dancer. Besides of course being a terrific actress which she has already proved."


Unlike Varun's character in ABCD 2, Shraddha's character is fictitious. Says Remo, "We needed a strong female presence. So I wrote her character into the real story. As for Prabhu Dheva, he plays a dance teacher named Vishnu Sir, like he did in the first film. But although he has the same name and same profession, Prabhu Dheva plays a different teacher this time. I've just taken his character from ABCD and placed it in different perspective in ABCD 2."


Remo says the sequel to ABCD would be far bigger in terms of canvas, scope, characterization and budget.


Says Remo, "I hope to make take the sequel much ahead of the first film. It's a long journey. And it's a true story; therefore it's a double responsibility. We're looking forward to starting the film. We'll miss Kay Kay Menon and Ganesh Acharya who had stellar roles in the first film but are not part of the second film."