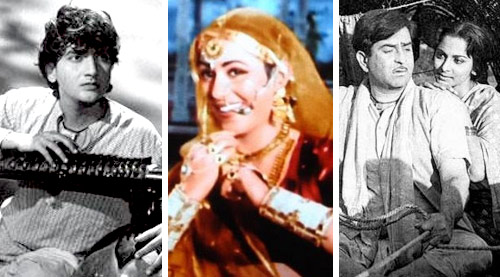 The world of music changes over decades, yet, nothing does! To use a line from a past potboiler, everything is "same same but different". Presenting 20 tangy facts about film music (down decades), which everyone may not know.

Baiju Bawra (1952): Most, if not all, of the songs in this film, were adapted by Naushad from folk compositions and classical bandish-es from Uttar Pradesh. The composer's triumph lay in his re-designing them to make hummable perennials.

Twenty facts you did not know about our film music

Anarkali (1953): Roshan was awakened in the middle of the night by C.Ramachandra, who never made the tune first, as he was stuck to make an antara for the recording of a Rajendra Krishan-penned song the next day. The song was the classic, 'Yeh Zindagi Ussiki Hai'. Over glasses of whisky, Roshan sat with him and composed the antara in minutes!

Devdas (1955): It is said that Bimal Roy called Salil Chowdhury to compose a section of the background score, which was credited to S.D. Burman. But Dada Burman has gone on record to state that Salil-da (in those days composers were friends, not rivals) even had a hand in providing the frameworks of some tunes.

Jab Jab Phool Khile (1965): The cult classic, 'Pardesiyon Se Na Ankhiyaan Milana' was composed by Kalyanji-Anandji from the framework of a thumri that Nirmala Devi, actor Govinda's mother, would sing for riyaaz every morning. Director Suraj Prakash, Nirmala Devi's neighbour, would hear it every day, and insisted on adapting the classical composition!

Teesri Kasam (1966): Hasrat Jaipuri's only song in lyricist-producer Shailendra's production had new antaras written to Majrooh's Sultanpuri's conceptual mukhda 'Duniya Bananewale' (What made God think of making the world?). Raj Kapoor had offered backdoor help in the '50s to the self-respecting Majrooh when he was a political prisoner by visiting him in jail and asking him to work on this idea. He had paid him Rs. 5000 for it when lyricists never got more than Rs 1500!

Anita (1967): Except for one ghazal, all the songs of this musical milestone had been written by Raja Mehndi Ali Khan. After his death, Raj Khosla and Laxmikant-Pyarelal summoned Anand Bakshi, then yet to come into the big league, to write the remaining song, 'Hai Nazar Ka Ishara'. Bakshi insisted that his remuneration be sent to Khan's widow!

Upkar (1967): The cult classic 'Mere Desh Ki Dharti' that won Gulshan Bawra an award was written when, in his struggling days, he would work as a railway goods clerk. He would marvel at the sacks and sacks of golden wheat that came in from Punjab and wrote the basic poem, combining elements from two existing songs that he had loved when Manoj Kumar commissioned it for the film!

Mera Naam Joker (1970): When Shailendra died after writing the mukhda of 'Jeena Yahaan Marna Yahaan', Hasrat Jaipuri completed the song that was credited to Shailendra's son Shaily Shailendra, an aspiring lyricist then.

Maati Maangey Khoon (1984): Ghulam Ali has gone on record that 'Awargi' was ghost-composed by Ali himself, though the song was recorded by the film's music director R.D.Burman. Interestingly, Ali's song in the film called Awargee (1990), he revealed, was actually composed by Anu Malik.

Nache Mayuri (1986): The songs were scored by Laxmikant-Pyarelal and the background score by singer S.P. Balasubramaniam. The song 'Pag Padam' was composed by the latter as a part of the BGM. But when it was adjudged the prestigious Sur-Singar Samsad's Best Classical-based Film Song of the year, it was L-P who accepted the award as the film's official music directors!

Aaj Ka Arjun (1990): The Cibaca Geet Mala annual topper 'Gori Hai Kalaiyan' 'composed' by Bappi Lahiri was a smart rehash of a song by Shankar(-Jaikishan) for the small film Gori that had been stuck for a long while, when Bappi heard the composition on a studio tape! This film then released two years later, with the original Kavita Krishnamurthi-sung song intact-it can still be heard on the 'Net!

Dil (1990): The last song of Dil (was it 'Dum Dumadum'?), according to a trade magazine, was recorded and then dubbed with new lyrics to the same tune. But after the cassettes were released, T-Series decided to revert to the older version and released the next lot with the original lyrics!

Drohi (1992): The Ram Gopal Varma film officially had music by R.D. Burman and lyrics by Javed Akhtar. But one unrevealed song was ghost-written by Mehboob, while 'Dhadkaati Mere Dil Ko' (Vinod Rathod-Chitra) was ghost-composed by M.M. Kreem!

Dalaal (1993): The popular song 'Ove Maine Chori Chori' was used by producer Prakash Mehra from an old composition by Kalyanji-Anandji's brother Babla that was lying with him. Babla got a fleeting credit only in the titles of the film but Bappi walked away with the credit!

Kuch Kuch Hota Hai (1998): The cult title-song was a mukhda of actor Jugal Hansraj (written and tuned by him) that was used by Jatin-Lalit.

Devdas (2002): In the 2002 film of that name, the song 'Silsila Yeh Chahat Ka' was credited to Ismail Darbar but actually marked the (unofficial) composing debut of Sanjay Leela Bhansali!

Zeher (2005): The beautiful 'Agar Tum Mil Jaao' was originally the mukhda of a Noorjehan song from Pakistan. The song was adapted with fresh antaras written by Sayeed Quadri and composed by Anu Malik to the basic framework of the main lines. Again, the original can be heard online.

Waada (2005): By prior consent, this Kavita Seth-composed and sung song 'Maula' was credited to Himesh Reshammiya. But this writer had heard the composition from her some years before, when Kavita had yet to find a footing in Mumbai!

Jodhaa Akbar (2008): 'Khwaja Mere Khwaja', reveals Ashutosh Gowariker, was a Sufi devotional composed by A.R. Rahman's family darvesh, and was neither written by Javed Akhtar nor tuned by Rahman.