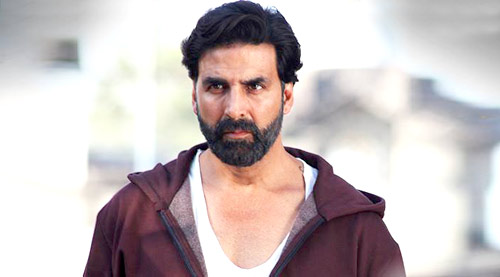 It is no more a breaking news that industry is going through really bad times this year. So after Baby, which stays on to be the biggest Bollywood grosser of the year so far, will it be Akshay Kumar again who will act as a savior and bring it out of the doldrums with Krish directed Gabbar Is Back? The industry seems confident.

Akshay Kumar films are always awaited with bated breath, despite him doing four to five a year, and that too for so many years. On the other hand, other stars don't even dare to tread the same path. Every release of his does bring expectations from trade and public alike. Gabbar Is Back is no exception. It has generated good curiosity and audiences are keenly waiting for it. I feel that this time too, Akshay will deliver and provide the much needed pump at the dying Box Office.

I hope that does happen. Every big film comes with its fair share of expectations and this is the biggest of the year so far. The biggest challenge is to bring people out of their homes and step into theaters. As an industry person, I would always want a biggie to succeed so that everyone in the supply chain benefits.

I am very confident about Gabbar Is Back as it's the only big star film coming after a really long time. Since World Cup and now IPL, there haven't been any major releases. However when a notable film arrives, it works, something that has been proven by Fast & Furious 7 as well as Avengers - Age of Ultron. So yes, fingers crossed for Gabbar Is Back. Akshay Kumar is a star and has a great loyal fan following. Also, the very title Gabbar will do its magic. Moreover, if I go back in time, whenever we have distributed a Sanjay Leela Bhansali film, there has been magic, be it Black or Hum Dil De Chuke Sanam.

Every big film brings hope and optimism, but unfortunately each time the industry is left in shambles. Four months of depression creates a dent into the confidence of the biggest optimist. We all keep our fingers crossed for Friday, May 1.

While Akshay Kumar may not have had blockbusters of the magnitude of those that Shahrukh, Salman and Aamir have had over time, what he has managed to do consistently over the years is as praise worthy, if not more! Unlike the other superstars, Akshay Kumar has churned out an average of four films an year, which have a cumulative turnover equal to that of the one or two odd films that other stars release in the same period! This generates anticipation, excitement and most importantly revenues virtually every quarter, keeping the industry's mood upbeat and kicking!

Yes all hopes are pinned on Akshay Kumar. Gabbar Is Back looks like it should do wonders at the Box Office, considering there are holidays too. But again, the content will matter a lot for a long run which the industry needs.

Gabbar Is Back is looking good to me. It's been a while since a hardcore commercial film has released and this is the perfect time for it. The trailer has been appreciated and the song 'Teri Meri Kahani' is a chartbuster already. I think the film will bring back the memories of Rowdy Rathore.