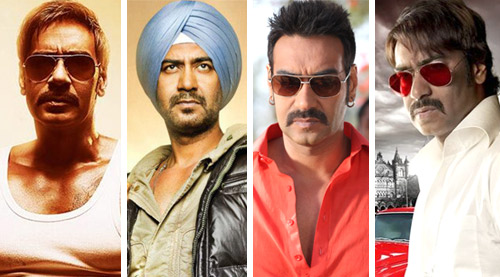 It was almost a quarter of a century ago when Ajay Devgn stormed into the scene big time with Phool Aur Kaante (1991). Ever since then, he has played Mr. Consistent with at least one biggie every year. This year, he has only one film of his which is slated to hit the screens, Drishyam. One waits to see if the 46 year old manages to score a big one with the remake of this much loved Malayalam film by the same name. Meanwhile, here is looking at the actor's ten biggest grossers ever.

Singham Returns - Rs. 140 crores
Singham Returns enjoys the record for the biggest weekend and week ever for Ajay Devgn. The film was also the fastest Ajay Devgn starrer to enter the Rs. 100 crore club. However, this isn't where the film put a stop. Courtesy the tremendous start that the Ajay Devgn-Rohit Shetty combo took, the actor-director 'jodi' also managed to score their biggest grosser together ever. Yes, the film didn't cover the kind of distance that looked on the cards after a tremendous opening. Nevertheless, it was still a clean Superhit.

Golmaal 3 - Rs. 106 crores
Golmaal 3 was the first time ever when Ajay and Rohit entered the 100 crore club. Third in the series of a franchise that the two have successfully nurtured, Golmaal 3 saw its fair share of criticism, something that the duo has got used to by now. However, audience has not quite minded the fun-n-frolic that comes with the territory with cars colliding mid-air only adding on to the entertainment quotient.

Son of Sardaar - Rs. 105 crores
Pretty much in the same mode as the kind of films Ajay has done with Rohit, he entrusted the responsibility of directing Son of Sardaar to Ashwani Dheer. The man did his job and though the film had its fair share of rough moments, there was no stopping it from entering the Rs. 100 crore club despite a much-hyped high profile clash with Shah Rukh Khan's Jab Tak Hai Jaan. Ajay continued his good run in Diwali season.

Bol Bachchan - Rs. 103 crores
As for Ajay and Rohit, they continued their great run together with Bol Bachchan entering the Rs. 100 crore club as well. It wasn't the best that Rohit Shetty had offered in the past but then wonderful promo, some genuinely fun moments and good dose of 'masala' entertainment ensured that this official remake of Amol Palekar's Golmaal went on to be a good success with the audience.

Singham - Rs. 100 crores
Simply the best film that Ajay and Rohit have done together, Singham pretty much established a benchmark for not just the director and the actor but even others in the industry when it came to presenting a cop action drama. If Dabangg played down the seriousness quotient and focused on light hearted elements, Singham was no-nonsense business and went many steps ahead of the Tamil original.

Raajneeti - Rs. 93 crores
In one of his best acts till date, Ajay Devgn spoke with his eyes, and how, in Prakash Jha's Raajneeti. Ironically, the film also resulted in quite a few tense moments between the actor and the director as the film turned out to be a Ranbir Kapoor show towards the culmination, hence making one wonder whether Ajay was adequately utilized. All was well though eventually as the film turned out to be Jha's biggest.

Satyagraha - Rs. 65 crores
It was all sorted eventually between the actor and the director as they went on to reunite with Satyagraha. Though the film didn't quite cover a distance when it came to box office glory, it still took a good start and did reasonably well as per the genre. Since the film had politics as the running theme and maintained a dry narrative right through, it all boiled down to performances which were good yet again.

Once Upon A Time in Mumbaai - Rs. 58 crores
In one of his most stylish acts till date, Ajay Devgn fired all cylinders with Once Upon A Time In Mumbaai which also stays on to be one of his most loved too. As a gangster with a heart, Ajay brought a humane side to the state of affairs while his swagger did rest of the talking even as he took on his friends as well as enemies. With Milan Luthria calling the shots, Ajay enjoyed some wonderful moments for the screen.

Golmaal Returns - Rs. 52 crores
There were strong hints of what would come in years to follow when Ajay Devgn and Rohit Shetty entered the Rs. 50 crore club with Golmaal Returns. As a sequel to Golmaal, the film benefitted from a good opening weekend that kept the ball rolling. Though the film is not as memorable as the others in the franchise, the fact remains that it is successful and a good exhibit to showcase in Ajay's repertoire.

All The Best - Rs. 42 crores
If not for a heads-on collision with Akshay Kumar's Blue, All The Best could have covered a much greater distance. A good full-on-laughter affair, the multi-starrer affair led by Ajay Devgn boasted of several funny moments that kept the spark on during its Diwali release. It opened lesser than Blue but then went on to edge past by, albeit by just a few lakhs, in the long run. Yet another Ajay-Rohit success!