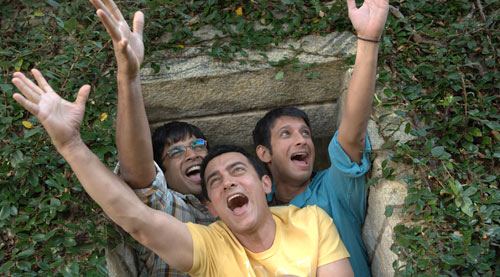 "Aamir Khan has never been considered in the same musical league as Salman Khan or Shah Rukh Khan. And there's a valid reason for this: In the last 15 years, his branding as the perfectionist, thinking actor who pursues excellence and does commercial cinema with a difference has taken the spotlight away from his musical aces. In fact, as Aamir turns 50, it will not be an exaggeration to say that the actor must have had at least 50 notable songs.


Audiences, even media observers, have changed, memory spans are shorter, and above all, the composers who worked with him most at that time - Anand-Milind, Nadeem-Shravan, Jatin-Lalit and even Bappi Lahiri - are out of the game. Even Anu Malik and A.R. Rahman are no longer in his orbit.


Udit Narayan, Aamir's most frequent and popular voice, followed at a distance by Kumar Sanu, are no longer at their prime popular peak. Aamir Khan with Udit Narayan was the last truly enduring association of a star with a singer, and today, Aamir's voice changes almost with every song. He has also not developed a strong combo with any composer, and now that he does a film every one, two or three years and the days of the star-composer combo are also gone, there is nothing that stands out, like when Dilip Kumar - Naushad or Dev Anand - S.D.Burman were consolidated teams.


Aamir's recent films have also never been music-centric but have focused on a story; like Taare Zameen Par, Ghajini, 3 Idiots, Talaash, Dhoom 3 and PK, his last six releases (we will disregard Dhobi Ghat, which was song-less, and Delhi Belly, in which he only had a cameo). Post-2000, situational compositions also strangely tend to lack in popular appeal, with certain exceptions proving the rule.


Technically, Aamir Khan's first popular song was the female version of the title-track of Yaadon Ki Baraat, a film in which he was the kid avatar of leading man Tariq. In this song, interestingly, Padmini Kolhapure and Shivangi Kolhapure (actor Shraddha Kapoor's mother) sang as child singers collectively for the kid actors, so one could almost say that Padmini, later to be a top star, made her 'overall' debut, singing for Aamir Khan in his 'overall' debut! The music was by R.D. Burman.


But of course, the cult song that helped make Aamir Khan famous overnight was 'Papa kehte hain' from Qayamat Se Qayamat Tak, composed by Anand-Milind and written by Majrooh Sultanpuri. This also established Udit as the voice of Aamir, an affair that continued till Lagaan and Dil Chahta Hai 13 years later.


QSQT had an all-popular soundtrack, and Udit was the only voice for Aamir, as was the case when any actor made his debut in a musical film (Bobby, Ek Duuje Ke Liye, Love Story, Betaab, Hero, Maine Pyar Kiya, Raju Ban Gaya Gentleman - Deewana) in that era. The songs, 'Ghazab ka hai din', 'Ae mere humsafar' and 'Akele hain to kya gham hai', twinkle-toe contemporary, deeply melodious and lyrically strong, all reverberated throughout the nation.

The next Aamir blockbuster was Anand-Milind's Dil. Though Suresh Wadkar came in for 'O priya priya' (said to be ripped from an Ilaiyaraja hit), it was Udit who shouldered the other duets, 'Mujhe neend na aaye', 'Humne ghar chhoda hai', 'Hum pyar karnewale' and 'Dum dumadum' besides the teasing solo 'Khambe jaise khadi hai'. The film became the biggest hit of 1990 and the music was a big factor in its success.

Sadly, Anand-Milind, because of their misguided obsession with quantity, could not replicate this success again. In the same year, they came up with Aamir's home production produced by father Tahir Husain, Tum Mere Ho, Jawani Zindabad and Deewana Mujhsa Nahin. It was only in the last mentioned film that they came up with three memorable songs that lost the race once the film tanked, the title solo by Udit, the magnificent 'Hum tumse mohabbat karte the' with Amit Kumar as his voice, and Udit's unsung but splendid classic, 'Main sehra baandhke aaoonga'.


It is again interesting trivia to know that this is the point where Aamir signed Shekhar Kapur's film Time Machine with the music by then- Numero Unos Laxmikant-Pyarelal, who even recorded a song with Udit Narayan. But the film was shelved very soon, though we would love to listen to this only L-P-Aamir melody!


Nadeem - Shravan were the hot, new flavours, and they scored three musical hits for the superstar in the next five years, Dil Hai Ke Manta Nahin, Hum Hain Rahi Pyaar Ke (produced by Aamir's father again) and Raja Hindustani. Though most of the songs in all three films were popular, the major chartbusters were the title-track of the first film, 'Ghunghat ki adh se' from the second, and the cult 'Pardesi pardesi jaana nahin' from the last. But except in the last film, where Udit took the lead among three playback singers for Aamir, N-S preferred their pet Kumar Sanu as the voice of Aamir.


In Jatin-Lalit's Ghulam, Aamir sang his only super-hit song as a singer, the cult 'Aati kya Khandala'. The composers lauded him for the intensely meticulous rehearsals and efforts made by Aamir in the days when pitch-correction software had not yet come in.


Anu's Baazi was noted less for Udit's 'Dheere dheere aap mere' but more for Aamir's most unusual playback voice ever - Kavita Krishnamurthi Subramaniam! In the film, the actor, dressed up as a female club dancer, is shown tangoing and warbling, 'Dole dole dil dole'!


Aamir Khan entered the millennium on a dull note with the disaster Mela (2000). Nevertheless, veteran Rajesh Roshan created the tangy 'Kamariya lackhe re' for him here.


But A.R. Rahman's Lagaan, Aamir's debut production, and Shankar-Ehsaan-Loy's Dil Chahta Hain, the next completely new-age score in Hindi cinema after QSQT, both came in 2001 and rocked; also sweeping most of the popular music awards between them.


In 2006, most of the songs of Rahman's Rang De Basanti became major hits, but for Aamir personally, it was the Shaan-rendered 'Chand sifarish' (in Jatin-Lalit's Fanaa) that really became a chartbuster among songs lip-synched by him.


Later, his next production and directorial debut, Taare Zameen Par, achieved lasting fame for the Prasoon Joshi-written, S-E-L-composed 'Maa', while his intentional tryst with profanity, Delhi Belly, musically handled by Ram Sampath, became notorious for 'Bhaag DK Bose'. Neither was filmed on the superstar.


However, thanks to cousin Mansoor QSQT Khan's involvement, the music of his production with nephew Imran Khan, Jaane Tuâ€¦ Ya Jaane Na, was a big hit, though Rahman could not repeat the success with Aamir on-screen in Ghajini, except for 'Guzarish'.


Aamir's last musically brilliant soundtrack remains Shantanu Moitra's 3 Idiots, with songs featuring ('All is well', 'Zooby dooby') as well as referring ('Behti hawaa sa tha woh') to Aamir's character making a huge splash. Pritam's Dhoom:3 ('Malang', 'Tu hi junoon') had standout songs for Aamir, though. And even in Shantanu's PK, 'Love is a waste of time' was a situational and worthy addition to the Aamir Khan repertoire.