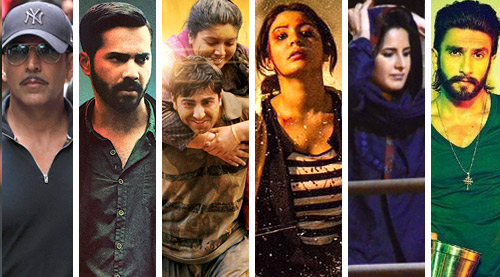 Baby is the biggest grosser of the year with collections close to the Rs. 100 crore mark. Dum Laga Ke Haisha, made at a modest budget of Rs. 9 crores, has turned out to be a neat success with Rs. 20 crores already in from theatrical business. Badlapur, which was made at a cost of Rs. 16 crores despite featuring Varun Dhawan in it, is a clean hit too with Rs. 50 crores from Indian theatrical. Last year, Queen - another low budget, but high content entertainer - surpassed all records to cross Rs. 60 crores in India just from box office sales.


Now for NH10, made at a budget of just Rs. 13 crores (including P&A) is benefitting too since Anushka Sharma has foregone a part of her fee so that the money goes into the making of the film.


In the times when heavy front loading has damaged prospects of many movies due to high cost of roping in superstars, as well as unimaginable marketing and promotion costs, the key to the recent commercial successes has not just been their controlled budget but also the fact that they are back end driven.


"This means that more and more actors are agreeing to work on a film with minimum remuneration, and are instead willing to get into an arrangement where they benefit more from the profits earned," informs a trade insider, "Akshay Kumar was one of the pioneers when he initiated this for his films 5-6 years back. He too believes in a profit sharing mode, instead of a onetime pay package. This is a phenomenon which is picking up well now and the biggest of actors and directors have started showing their consent as well."


After all, low front ending ensures that the money is spent wisely on the making of a film, instead of catering primarily to star fees (and in the process impacting the core production quality). One such film where this thought process has already been implemented is Phantom. Despite producer Sajid Nadiadwala roping in three heavy weight names in the form of Saif Ali Khan, Katrina Kaif and director Kabir Khan, the film has been made at a modest budget of Rs. 40-42 crores. This, when the thriller has quite a few high octane and elaborate action sequences in there. Apparently, none of the aforementioned stars have charged heftily.


Same holds true for Sanjay Leela Bhansali too who has decided to forego his salary and instead opted for a profit sharing mode, hence relieving his magnum opus Bajirao Mastani of its many crores when it came to its making. The film is now reasonably priced at 100 crore. Such kind of profit sharing model helped the director's last Ram Leela as well where he had opted for a profit. That had proved to be a win-win situation for all when the Ranveer Singh - Deepika Padukone starrer entered the 100 crore club.


"This is the need of the hour," says a prominent filmmaker, "What is appreciable is that stars too have started getting a hang of the current situation. With number of films getting shelved practically every week, it is prudent that those in the business understand what really works for all involved and how that can lead to a win-win situation. Instead of waiting for that one big offer which may get them good pay package but not necessarily a quality product, it is only wise to pick a right film at controlled remuneration and then reap benefits from the profits that come in."


A few good men (and women) have already shown the way by leading the pack. Will others follow suit too? Well, for them as well as the industry, we hope so.


As a prominent trade expert opines, "If the intent is right, this model can prove to be a goldmine for all involved."

Karanvir Bohra and wife Teejay head out of…

Taimur Ali Khan poses with a baby and he…

Amrita Rao and RJ Anmol announce the name of…

Amrita Rao talks about being a new mother