While fans of Taimur Ali Khan are eagerly looking forward what the little prince is upto, let us give you an update of the same. Tim has taken off on a village trip and is accompanied by his actor-parents Saif Ali Khan and Kareena Kapoor Khan. He is currently in Meerut and was seen taking a village tour recently. 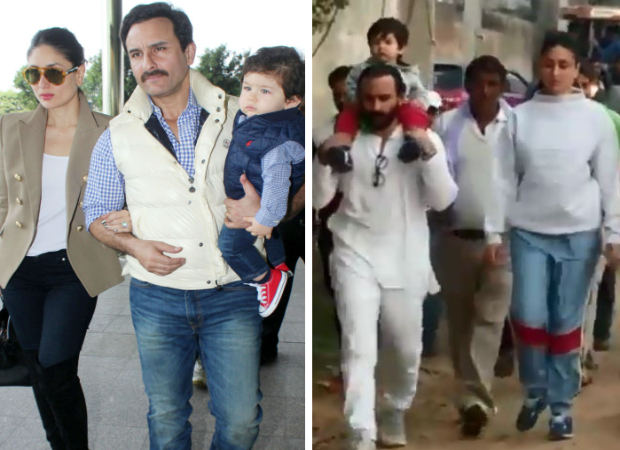 Saif Ali Khan, Kareena Kapoor Khan and their son Taimur Ali Khan visited the Ghosi Purna village in Meerut recently and were seen taking a stroll on the streets there. They were accompanied by their time and here’s a glimpse of the same:

Away from the Mumbai spotlight Papa #SaifAliKhan gives baby #TaimurAliKhan a taste of real unfiltered India ????

Taimur Ali Khan, as we know, has become the star of social media and also has a massive fan following who is keen on knowing about the life of this little Pataudi. He seems to have won the hearts of many with his innocence. The young prince was also seen learning horse riding recently.

On the other hand, Taimur’s mother Kareena Kapoor Khan is quite busy shooting for Good News with Akshay Kumar. The Dharma film that deals with surrogacy and IVF also stars Kiara Advani and Diljit Dosanjh in prominent roles. Besides that she will also be collaborating with Karan Johar for the multi starrer Takht featuring Ranveer Singh, Alia Bhatt, Vicky Kaushal, Bhumi Pednekar, Janhvi Kapoor and Anil Kapoor.

As for Saif Ali Khan, he is expected to feature in an unconventional role in the period drama Hunter, directed by Navdeep Singh. The actor will be seen in a negative role in the Ajay Devgn starrer Taanaji – The Unsung Warrior and has also completed the second season of the popular series Sacred Games.