A very pretty Maharashtrian girl steps out of her humble home to go to her workplace when a neighbour shouts out, ‘Ae Madhuri Dixit.’ In the next ten minutes this girl Anjali, played by the lovely and effective Meera Chopra, will be raped by her boss, an arrogant film director (played with agonizing efficacy by Rahul Bhat) who speaks to his associates on the set as though they were vermin and parasites born to serve and be abused. 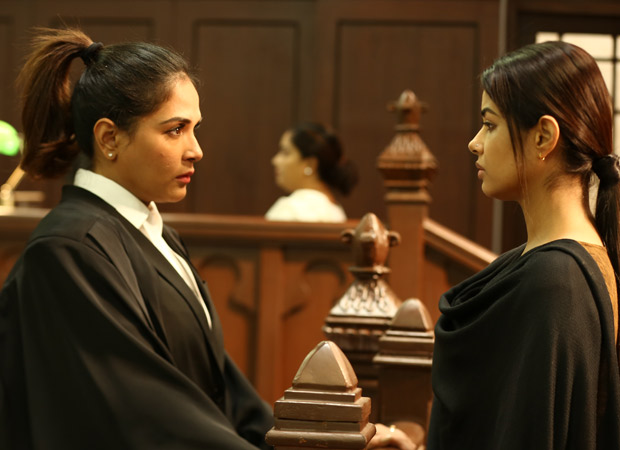 In the next five minutes this jerk of a filmmaker will be arrested and tried for rape.

But did he really commit the crime? The question hangs thick in the narrative, circling the tense courtroom drama provocatively, letting us know that when it comes to sexual allegations, nothing is what it seems. Madhur Bhandarkar will vouch for that. As would Shiney Ahuja.

The trial comes later. Right now Anjali is at the police station with her mother trying to register an FIR against the man who raped her. The officer in-charge asks leery invasive question in the effort to dissuade Anjali from taking her violator to task. But she braves it out. Answers the sleazy puerile questions: did the man ejaculate inside her, etc etc? It is not a film or those who like their cinema over dinner.

Here I must say Meera Chopra plays the victim card close to her chest. She is being violated repeatedly by being reminded of her rape. Her predicament is projected in this dark yet uplifting tale of justice as opposed to the law in a light so ambivalent, it becomes hard to tell whether she is a victim or a perpetrator.

Section 375 is suffused with brilliant performances, none more brilliant than Akshaye Khanna as the alleged rapist’s defence lawyer. Every twitch of Khanna’s facial muscles is priceless. His legal eagle character doesn’t make a mockery of justice. But he comes so close to deconstructing the prosecution’s case he seems to enjoy lusting in the loopholes of the legal system.

In opposition Richa Chadha finds it hard to stand up against Khanna’s lumbering legalese in the court. And mind it; Khanna is just as good outside the courtroom with his screen wife Sandhya Mridyul in a bathroom sequence where he suggests they “make twins” there and then.

While deconstructing the rape theory director Ajay Bahl (blessedly back after the bold BA Pass 7 years ago) makes some room for questioning a system that blindly accepts the woman’s allegations in a rape case. The film’s morally ambiguous ending will appal some #MeToo supporters.

Bahl and his writer Manish Gupta don’t shy away from wetting their feet in muddy waters. The narrative sticks its head out as far as possible not afraid to face the repercussions. This is a film that was waiting to be made. Relevant and rousing in its synthesis of polemics and plain rabble rousing.

Nothing is as it seems in Article 375. Except that a filmmaker who is convicted may be guilty of some other crime altogether.

Also Read: This is why Richa Chadha and Akshaye Khanna kept their interaction to minimum on the sets of Section 375