Section 375 Movie Review: Akshaye Khanna and Richa Chadda starrer SECTION 375 is a hardhitting courtroom drama that stars on a fine note and raises some important points.

The #MeToo movement took off in a big way in 2017 in Hollywood after well-known producer Harvey Weinstein’s sexual harassment episodes became public. It reached India a year later and became a huge social movement. Although the movement made people aware of some genuine cases, it also came to light that some of the allegations were false or were made with ulterior motives. The latest film SECTION 375 is inspired from cases of this nature and expects to make a hard-hitting point. So does SECTION 375 manage to succeed in its endeavour? Or does it fail to impress? Let’s analyse. 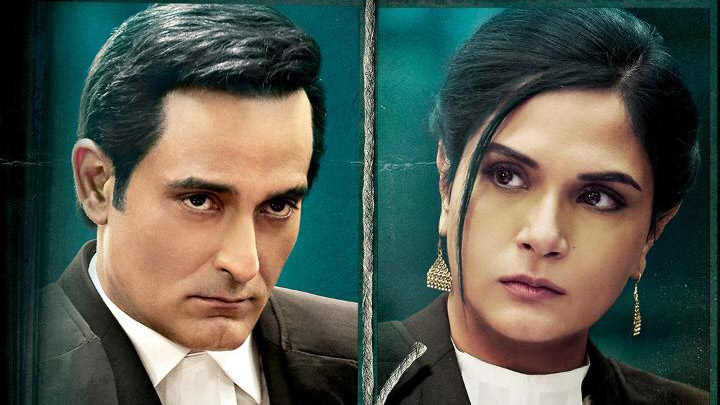 SECTION 375 is the story of a filmmaker accused of rape. Anjali Dangle (Meera Chopra) is a junior costume designer on a film set. She’s told to go to director Rohan Khurana’s (Rahul Bhat) residence to show him the costumes. When she reaches the house, Rohan and the house maid are present. Rohan sends the maid out of the house on some pretext and then forces himself on Anjali. Anjali reaches her house and tells her family that Rohan raped her. The same evening, Rohan is arrested from his film set. The Sessions Court finds Rohan guilty and sentences him to ten years of rigorous imprisonment. Rohan’s wife Kainaaz (Shriswara) approaches famous criminal lawyer Tarun Saluja (Akshaye Khanna) to file the case in the Bombay High Court. Tarun goes through Rohan’s file and realizes that the Sessions Court verdict was unfair. The case gets accepted in the High Court and the trial begins. Tarun’s ex-protégé Hiral Gandhi (Richa Chadha) is the public prosecutor and Anjali’s lawyer. As the case begins, a lot of unknown and intentionally hidden details tumble out. What seemed like an open and shut case of rape turns out to be murkier than expected. What happens next forms the rest of the story.

Ajay Bahl's direction is quite apt. He captivates the viewers with his storytelling and doesn’t lose their attention even once in the 120 minute duration. Also, he presents both sides quite nicely and convincingly. This is a courtroom drama but like conventional Bollywood films in this genre, the film is not made in a dramatic fashion. Yes, a lot is happening in the film but it is all done a bit more realistically. On the flipside, the second half is where the film drops a bit. One expects a film with so many unpredictable moments to end with a bang. Sadly, that doesn’t happen. Also, it’s bewildering why Hiral, who used to shout ‘Objection’ each time Tarun would present anything or make an attention grabbing statement, doesn’t react at all when Tarun explains to the court how Anjali got the injury marks on her inner thighs. Except for Tarun, the private lives of Hiral and Anjali are never shown and it takes away the impact to an extent.

SECTION 375 begins on a fine note. Tarun Saluja explaining the concept of justice and law by giving the instance of the 2012 Nirbhaya gang rape case makes for a strong point and it also indicates what is to follow. The scene where Anjali meets Rohan in his house and the alleged rape happens is quite smartly executed and only a part of it is shown to keep the unpredictably going. This is followed by probably the most gut wrenching scene of the film – the medical officer asking the gory details of rape to Anjali quite nonchalantly, in front of her mother. And also, the said medical officer is a male! The film obviously goes on a high once the trial begins. The manner in which it comes to light that the investigating police officer Milind Kasle (Shrikant Yadav) did an extremely shoddy job is bound to shock viewers. Post-interval, the interest is maintained as many more details pour out in the courtroom. The finale however lacks punch. Also, the verdict announced in the end might leave viewers divided.

Akshaye Khanna takes the cake when it comes to performances. Other actors also do well but Akshaye leaves a very strong impact. Whether it’s his dialogue delivery or his interrogating style in the court or his shrewd smile when confronted by the judges or Hiral, Akshaye’s performance is spot-on. Richa Chadha is very good as the no-nonsense lawyer whose idea of justice differs from that of Akshaye’s character. One of her heartening scenes is when Hiral is discussing about her partner and sharing her meal with her ‘rival’ Tarun. Rahul Bhat gets into the skin of his character. He’s too good in the beginning scene when he comes on the set and blasts everyone. Meera Chopra has very few dialogues initially but in the second half, she has a crucial part and does well. Krutika Desai (Justice Bhaskar) is good while Kishore Kadam (Justice Madgaonkar) is very impressive in his part. The latter also contributes to the laughter quotient. Shriswara speaks a lot through her silences and makes her presence felt. Shrikant Yadav is too good. His less-than-a-minute-conversation with Richa after he messes up in the court is memorable. Same goes Dibyendu Bhattacharya – his performance takes one of the most important scenes to another level. Sandhya Mridul (Shilpa) is lovely in the special appearance.

SECTION 375 is a songless film. Clinton Cerejo's background score however is subtle and dramatic. Sudhir K Chaudhary's cinematography is quite appropriate. The alleged rape sequence is shot well in different angles and the perspective changes with each angle. And he also makes use of some hand-held, zoomed-in shots that also helps with the impact. Nilesh Wagh's production design is decent. Ameira Punvani's costumes are realistic. Praveen Angre's editing is crisp.

On the whole, SECTION 375 is a hard-hitting courtroom drama that raises some important points. At the box office, it has the potential to grow significantly in multiplexes once the word of mouth spreads among its target audience.

EXCLUSIVE: Section 375 actress Meera Chopra files FIR against her interior designer over unprofessionalism and abuse; says “He PUSHED me out of my OWN house”

Section 375 Box Office Collections Day 1 - Section 375 has a low Friday, set for good growth though due to positive word of mouth

Excellent performance by Akshaye Khanna and Richa Chadha. This movie is surely one of the best one…