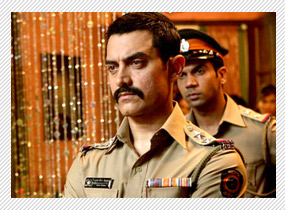 If God lies in the details, then by God, Talaash gets it foot into the temple-door all right. A films about ...well, search, pursuit, exploration and salvation Talaash throws forward the kind of "entertainment" that mainstream Hindi cinema was never conceived to be. Walking the tightrope between a whodunit and a supernatural thriller, director Reema Kagti creates a fine distinction between a niche experience and the populist idiom with the two seemingly irreconcilable cinematic experiences coming together in waves of astonishment that hit us as we watch a new idiom of expression come alive in front of our eyes.

It would be in the fitness of things to say, you've never quite seen or experienced a film like Talaash. The last half-hour is specially stunning, cutting across that fine line between drama and spiritualism without getting too deeply embroiled in an existential discourse that could easily distract the narration from its main purpose, namely to grip the audience.

From the outset Talaash gets a grip on its characters and the immeasurably tragic drama that they get embroiled in. Kagti doesn't waste time in introducing his protagonists. They seem to exist from a time before the camera was set up to track down their criminally caved-in lives. They are casualties of fate's fitful cruelty searching for salvation. They are people in transit waiting for boarding-passes to a promised paradise.

As we enter the beckoning underbelly of Kagti's unfinished world of seething cop, grieving wife, avaricious pimps and vengeful prostitutes we realize Kagti doesn't pity the damned. She treats every wretched character's history with redemptive grace imbuing even the minor players with a compassionate candour, rare to mainstream Hindi cinema.

The director's penchant for visual and spiritual detail is captivatingly captured by Mohanan's keen camerawork that cruises Mumbai's red-light area and green-lit suburbs looking for places where humanbeings can rest their soul in one piece. Talaash is a remarkably reposeful dekko at a group of restless people whose lives could do with some immediate healing.

There is the cop-hero Surjan Singh Shekhawat (Aamir Khan) and his wife Shreya (Rani Mukerji) battling the loss of their only son. Then there's the other plot about a murder, the murky secrets it brings out and the passionate platonic bonding that grows between Surjan and a mysterious and seductive prostitute Rosy(Kareena Kapoor) who talks like she has watched too many eerie films and who seems to hold the key to the plot's most vital mystery.

We see an astonishing synthesis of seemingly incompatible ideas in the way the co-writers Kagti and Zoya Akhtar bring together Surjan's two wounded worlds without fracturing the film's basic narrative structure. The drama's impact hinges to a large extent on Aamir Khan's character as he , more than any of the film's other tormented souls, must embrace the anomalies and contradictions that make a life an ongoing tragedy. That's what heroes do. They make life's burdens look bearable.

Aamir chooses to underplay his character's angst. This cop is hardly ever angry. And if he is, he doesn't show it.He doesn't display his emotional trauma .We know about them. We never see Surjan's true feelings. Is the character holding back emotions? Or is that the actor's interpretation? Even when at the end when the grieving father who has finally put his guilt about his son's death to rest, reads a letter from the dead son, we see very little emotion being invested into the cathartic moment.

Aamir is not unconvincing. He can never be that. His character seems unconvinced about the machinations of destiny that throw him in a double conundrum where he must find a peaceful solution to his personal loss while solving a case that seems to push Surjan deeper and deeper into a state of suspended disbelief.


Rani as one-half of a couple clenched in the shared grief of bereavement is much more palpably wounded. She expresses the mother's hurt in subtle but sharp demonstrations of a shooting pain whose impact we feel in full force. Kareena has a very difficult role to perform. Reema Kagti makes full use of the aloof sensuality that the actress has lately imbibed into her persona. In this case when we wonder if Kareena's beauty is for real we don't really know until the end how unreal it really is.

The casting in fact is impeachable even in the smallest of parts. The actresses playing prostitutes are so real in their shammed seductiveness we feel we are part of a guilty secret that time can never unravel. At one point Kareena, grappling with dialogues that deliberately favour ambivalence says, "Prostitution is illegal. Sex workers don't exist. So I don't really exist."

The moment defines the film's deepest philosophy. Your identity is yours only when it's endorsed by the State and society. Those who lives at the fringes, die there, unsung. Reema Kagti takes us into such lives with a tormenting absence of emotional outbursts. Tears do come. But in a tantalizing rationed trickle. This is not a film about excesses. For that, please watch the next installment of Dabangg. Here in Talaash there is no place for exaggeration. Every actor knows it.


The performance in Talaash that catches our eyes and grabs us by our collective balls is Nawazuddin Siddiqui. As a limping pimp who rapidly becomes part of a lethal crime game Nawazuddin sprints into action and creates one more credible compelling razor-sharp character, terrifying in his ability to create cutting curves around his edgy character.


Rajkumar Yadav as Aamir's cop-partner makes ample space for his character although he is provided with little room in the plot. And the ever-dependable Shernaz Patel has the daunting task of making her fairly ridiculous character look believable dependable and pivotal. She goes at it with the confidence that there's a director at the helm who will catch the characters if they fumble.


An uneasy hush envelopes Reema Kagti's hypnotic intriguing supernatural drama of the dammed and the doomed. From Frame 1 we know we're in the midst of a truly vital life-and-death secret simmering seductively under the smooth surface. The denouement when it comes, stuns. And that's pretty much in keeping with the rest of this haunting saga of guilt and redemption.

For all its seductive strengths (including a background score by Ram Sampath that opts for a quietly strong expression rather than hammering the drama to a frenzy of hysteria) Talaash is not without its flaws. God forbid! The moral and dramatic ambivalence which is the film's mainstay is also at times its biggest weakness. When the characters don't seem to have urgently-needed answers they fall back on karmic ambiguities. The dialogues wallow in wicked uncertainties. The water images which are essential to the plot, float to the surface of the narration like accessories of a drowning victim swimming uneasily on the surface.


But eventually the film's uncertainties work to its advantage. You know you are viewing a film that is saying a lot more than we get to hear in our cinema. Talaash gently and surely negotiates the chasm between our world of futile hustlebustle and a world where ambition avarice money and wealth mean nothing.


What the film finally asks is what makes it a powerful study of human bonding in times of tension and friction.


Is life worth living? If not, then is there something to look forward to after life?