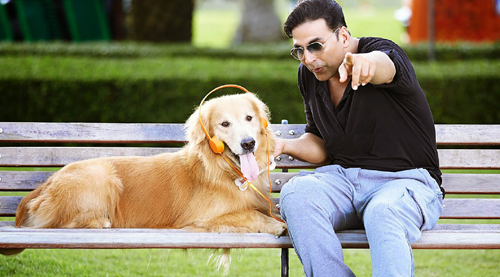 The canine-hero's name in the list of actors in the credit titles comes first because that's how Akshay Kumar wants it. This film tells you to love animals. It's a simple, straight forward premise structured around a comical plot about a gold-digger wastrel whose father leaves his billions to his dog.

Canine apni mutthi mein! Playing the predatory retriever with an evil glint in his eye and wicked smirk on his face Akshay Kumar has a ball in the film. He does a wickedly amiable mean act trying to poison, electrocute and drown the canine. Admittedly the characters on screen seem to enjoy themselves more than the audience.

Not that we don't share their enjoyment. For a large part of the narration Entertainment is fun to watch. The script is deftly and devilishly put together. If only writer-turned-co-director Sajid-Farhad did not trip over the cascade of word-play, the goings would have been much more pleasing. Lamentably every character speaks in a tumble of puns and word play, some of them painfully plodding and self-conscious.

My most cringe-worthy ode to filmy word-play is, 'Aapna Sonakshi seena taan kechal.'
Really, now! 'Where there are the saints there are also the Sinhas.'

The character played by the comically vibrant Krushna Abhishek crams in actors' names in every sentence. This would have been infuriatingly obtrusive in a film of a more serious nature. No such calamity befalls Entertainment.

The biggest USP of the reasonably entertaining Entertainment is that it never makes the mistake of taking itself too seriously. In the hilarious opening where in a product-endorsement spoof with Riteish Deshmukh, Akshay establishes his character as a rogue and a charlatan. The film hops, skips and jumps through hilarious hoopla, sometime generating a reluctant laughter in the audience, at other times leaving you a little numbed by the fatuous flavour of the farce.

In one sequence where the leading lady Tamannaah's father Mithun Chakraborty (singularly unfunny) advises his daughter to marry the dog since husbands become "dogs" after marriage anyway, one is not sure if the co-directors aim to be kinky or comical.

Some scenes walk on thick ice, quite literally. The moral turning-point for Akshay's character vis-a-vis the canine happens in a scene spread out on a dangerously thin ice-bed. It defines what the film tries to achieve given its flimsy premise and nebulous moral ground.

Holding the film from falling apart is Akshay Kumar. Sporting and sometimes sparkling with his comic timing he helps the audience to overcome the serious silliness of some of the material in the second-half where, in a style of cat-and-mouse game of Home Alone and Dunston Checks In Akshay gets even with two bumbling comic villains played with anarchic gusto by Prakash Raj and Sonu Sood.

Here is where the narration needed to exercise more temperance. Here is where Entertainment errs. It doles out too much of the farcical garnish that tends to tarnish the innocence of the relationship between Dog and Man.

A blend of the mischievous and the mirthful, Entertainment is a green-lit blues-chaser which tends to get carried away with its fun of mood. The gags flow non-stop, accommodating a hefty amount of playing-time to letting the characters grow into precocious over-grown brats.

In one sequence when Akshay Kumar gets to know his father's billions have gone to the dog, he rolls on the floor and wails like a baby. Dare any other A-lister actor do that.

Entertainment takes on the tripe that our cinema enjoys dishing out and turns it into some kind of a queasy crap-convention that knows it is making little sense most of the time and is not apologetic about its lowbrow aspirations.

And yes, most of Akshay Kumar's chemistry is with his canine co-star, an imperturbable retriever who seems resigned to being thrown in the middle of a plot which he cannot make sense of. We second that emotion.

Tamannah has precious-little to do, and she does it not so well.