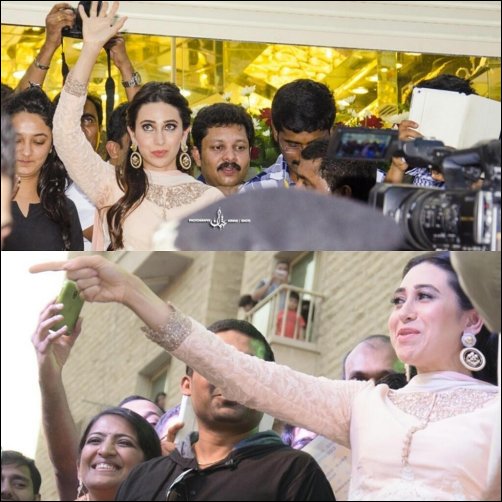 Former actress and yummy mummy Karisma Kapoor is now looking forward to a new phase in her career. Though the actress is away from Bollywood, Karisma still has endorsement deals in her kitty and she has even turned writer with 'My Yummy Mummy Guide'. Karisma Kapoor was recently spotted during the promotions of her cousin Armaan Jain's debut film Lekar Hum Deewana Dil and now, the actress was snapped at Kuwait attending the launch of a jewellery store.

Karisma Kapoor was in UAE for launching a new shop of the popular jewellery brand Chemmanur and she was welcomed warmly by her fans during her brief visit in the city. The former 90s diva looked as pretty in a traditional outfit and danglers, and she was surrounded by thousands of her fans who were attempting to catch a glimpse of this Bollywood actress.

Karisma Kapoor was recently in the news owing to her alleged divorce with her husband and business tycoon Sanjay Kapur. The actress, who is a mother to two children, had taken a sabbatical from films in 2006 and later, returned to Bollywood with Dangerous Ishq in 2012. However, Karisma decided to switch routes and is currently away from the film industry.

She recently wrote the book 'My Yummy Mummy Guide', published by Penguin, that talks about her experiences of being a mother and explores some facets of a woman as a mother and a professional. It is a guide to mothers that prepares them to deal with their motherhood with a reference to her own life and discusses topics like nannies, perfect maternity outfits and more.

Hailing from the legendary film family of Kapoors, Karisma Kapoor has given some memorable performances in films like Dil To Pagal Hai, Raja Hindustani, Hero No. 1, Fiza, Zubeidaa among others during her tenure in Bollywood.