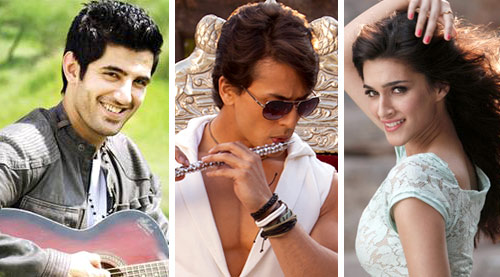 1. Aditya Seal in Purani Jeans: Though the film sank without a trace, Aditya's performance as the young troubled spoilt rich brat grappling with self-destructive tendencies was arresting.


2. Tiger Shroff in Heropanti: He can dance, he can fight, he can do serious and he do light. Yup, Tiger is born to burn bright.


3. Kriti Sanon in Heropanti: Confident and sassy, Kriti has quickly moved on to Akshay Kumar in Singh Is Bling. Overnight stardom, and richly deserved.


4. Patralekha in Citylights: As the rural wife and mother grappling with city reality, Patralekha at times, reminded us of Sharmila Tagore in Satyajit Ray's films.


6. Armaan Jain in Lekar Hum Deewana Dil: The family that gave us Prithviraj Kapoor, Raj Kapoor, Rishi Kapoor, Ranbir and Kareena Kapoor...Armaan has that spark too, waiting to be ignited.


7. Tahir Bhasin in Mardaani: He looked like a computer whiz kid working in a multinational. Instead, he was a flesh trader. Tahir's suave sub-human act made our flesh crawl.


8. Mohit Marwah in Fugly: He immolates himself at the start of the film. Luckily, his career didn't go up in flames.


9. Fawad Khan in Khoobsurat: It's not just Sonam Kapoor who got "gande gande khayaal" after seeing him. Girls across Hindustan swooned over this Pakistani import. A star was born.


10. Manish Dayal in 100 Foot Journey: Standing up to stalwarts like Helen Mirrem and Om Puri, young Manish playing a chef, gave us a performance to chew on.