Sonam Kapoor is a fashionista! She is staying in London with hubby Anand Ahuja. She is enjoying the English summer and is living the life. This month, Sonam is the cover star for Vogue India. 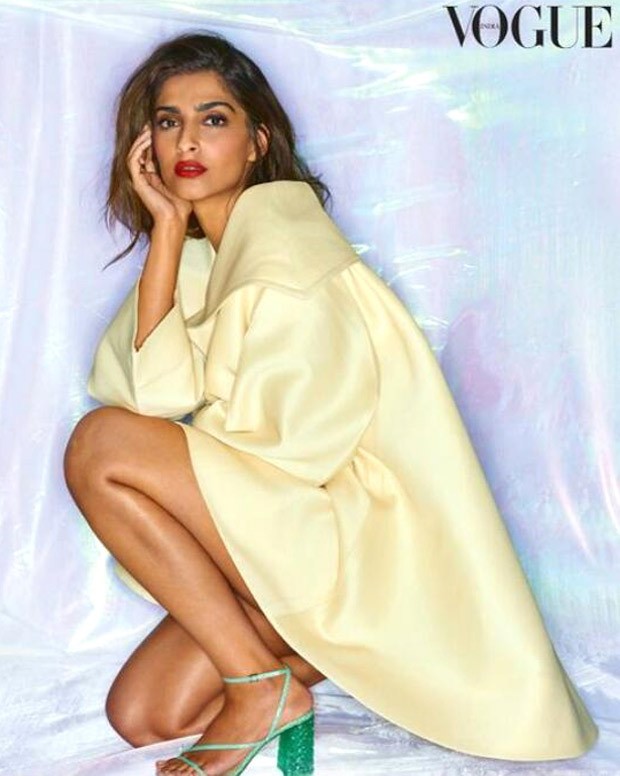 She looks ethereal in a royal blue fitted, princess cut gown. The soft makeup and tousled hair made her look radiant as ever. The blue gown from Christian Dior fits Sonam like a glove.

Sonam donned several looks for the feature. She is also seen in a black and white printed top as she is seen laughing and in a carefree spirit.

She is also seen dressed in a statement black and gold full sleeved number with bronzed cheeks, matte lips and her gorgeous tresses let down! The wears this statement piece from Schiaparelli Couture.

For another one, she is seen dressed in a beautiful soft hued yellow dress from Lanvin with sling back green heels.

For another stunning picture, Sonam is seen in an embellished baby blue, bustier cut dress with a slit from Versace. She is glowing and poses with a sultry expression.

In another look, she looks like a goddess in a pure gold flowy number from Dolce and Gabbana. The very beautiful Sonam Kapoor Ahuja in this bright gold piece with red lips and soft waves is one looker!

During the feature, Sonam talks about the pay gap, her husband and how she is so grateful to marry someone who is a feminist. She also talks about how she has been spending her time in London but how she misses Bombay, the food and mainly India. She proudly admits that her heart always lies in India.

On the work front, Sonam Kapoor has wrapped the shooting for her upcoming movie Blind. Directed by Shome Makhija, this action-thriller narrates the story of a blind police officer in search of a serial killer. The film went on floors in December 2020 in Glasgow, Scotland and the shoot was completed in a start-to-end schedule that lasted 39 days. Blind is produced by Sujoy Ghosh, who also present in the Scottish city during its shoot.