There is no stopping the megastar Shah Rukh Khan. After a brief sabbatical from the public glare, the King is back and how. After breaking the internet with his action-packed ad for Thums Up to Pathaan announcement to his famous #AskSRK session on Twitter, the actor has managed to stay at the top of social media trends over the past two weeks. On Tuesday morning, the actor was once again trending due to his latest ad for Dubai tourism. 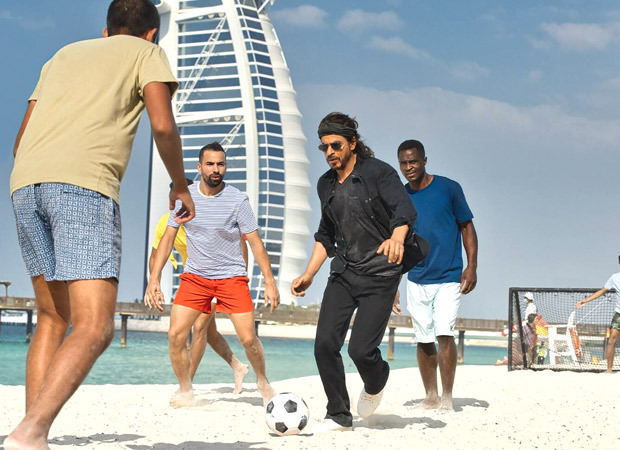 Shah Rukh Khan gets a call from daughter Suhana, dances and dabs on the streets of Dubai; watch

The ad which has Khan flaunting his long tresses begins with him getting a call from his daughter Suhana who asks about his whereabouts. She is heard suggesting him to walk around the streets of Dubai and experience the country. In the video, SRK is seen dancing around the streets, going shopping in the malls of the country, playing football on the beach with a  group of youngsters, and even doing the dab.

Soon after the release of the ad, fans of the star took to social media to share screenshots from the ad and praised the actor. "The Brand #ShahRukhKhan is back and you can't do anything about it," wrote one.

"Believe me he is 56 years old," wrote another.

“Just Imagine the Euphoria when #ShahRukhKhan will spot different looks for Multiple Mission," wrote a fan on Khan's look in the ad which he will be sporting in Pathaan as well.

BRAND SHAH RUKH KHAN IS BACK AND YOU CAN DO NOTHING ABOUT IT ???????? . This one is maybe old shoot as campare to now body shape.#ShahRukhKhan????
pic.twitter.com/J38PE5B7gJ

Dubai is like Second Home to #ShahRukhKhan???? ????#Pathaan https://t.co/mU7MrHc8mf pic.twitter.com/WfJVujgnzs

Just 2 months and 8 days into 2022 and Shah Rukh Khan already owns this year.
Nobody is doing it quite like @iamsrk pic.twitter.com/XL6SLfBX7D

Just Imagine the Euphoria when #ShahRukhKhan will spot different looks for Multiple Mission ????????????

The Principal shoot of #Pathaan will start from Today in Spain.

This Schedule will being with Action sequences ! #DeepikaPadukone #SRK #JohnAbraham pic.twitter.com/slXqDA2n7x