Sara Ali Khan is one of the finest debutantes from the film family, the industry has seen. The actress made her way to movies with Kedarnath in December 2018 and even gave a blockbuster with Simmba which starred Ranveer Singh. Having said that, the actress was already a social media star even before her debut. All because of the paparazzi and her famous parents Saif Ali Khan and Amrita Singh. Sara Ali Khan, who is the face of Vogue India's April 2019 issue, opened up about how her life is after her parents separated in 2004 after 13 years of marriage. Speaking about the same, she said, "and look where I am today; I have two happy homes." 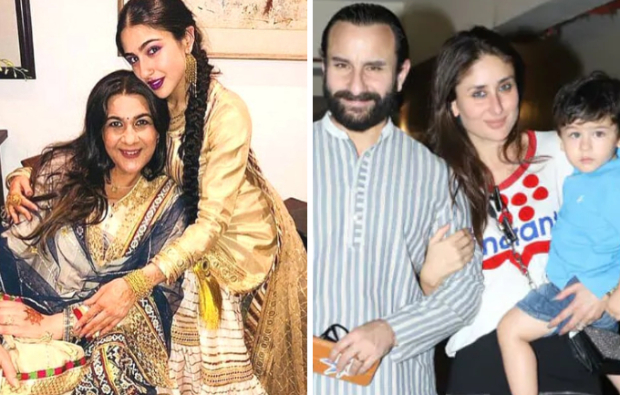 Sara even revealed how she and her father talk about everything from films to books to history. She even praised him for taking the leap of faith with Netflix Original, Sacred Games. “For him, taking a step like Sacred Games is so admirable. He doesn’t care about what people have to say. He’s just out there to do his work to the best of his abilities. He and I would agree that he’s doing his finest acting now. As a father, “he’s always just a phone call away… I am very thankful to Kareena [Kapoor Khan] because she makes my father happy.”

She further added, “He’s a lot like me—we’re both readers, we both like history, we’re both travellers. He is 25 years older than me, which isn’t a lot. I am right in between the age gap of Taimur [Ali Khan] and my father.”

It is known that youngest nawab, Taimur Ali Khan is the favourite baby of the nation. The kid is always under the media glare. Speaking of him and whether she gets to spend time with the little, Sara said, “To be honest, I don’t get to see Taimur very often but every time I do he’s a bundle of happiness. When Taimur is happy, the whole room is happy. He is my blood and the source of my father’s joy.”

Sara Ali Khan adoringly spoke about her mother Amrita Singh and how much of an influence she has been in her life. “My mother is the reason I am aware of who is who in my life. She’s my reality check. I was very good at studies, but I’ve always been a naughty child. It didn’t take my mom long to realise that she would never have the privilege to call a parent and say, ‘Keep your kid away from my daughter’ because her daughter was the menace,” she jokes. “This was geography class, I never really enjoyed it. I was like, ‘I just want to know more about Stalin, Hitler and Mao, see you never.’”

On the work front, Sara Ali Khan will be next seen in recently announced Imtiaz Ali ‘s next alongside Kartik Aaryan which is slated to hit the screen next year on Valentine's Day.