Sara Ali Khan's latest magazine cover has aptly put forth the distinctive traits of the young starlet as she brings in the summer with her breath-taking looks. Donning a red and white short dress, Sara Ali Khan looks summer ready with minimal makeup and soft beach waves, showcasing she is unscripted, unflappable and most definitely unstoppable. Shining like a star, Sara Ali Khan made her much-anticipated  Bollywood debut last year with Kedarnath and has been one of the most talked about debutante as both of her films, Kedarnath and Simmba, have had smashing records. Unlike others, Sara Ali Khan opted for a no magazine policy before debut, which absolutely shows her focus is all clear and she prefers to give attention to her craft more. 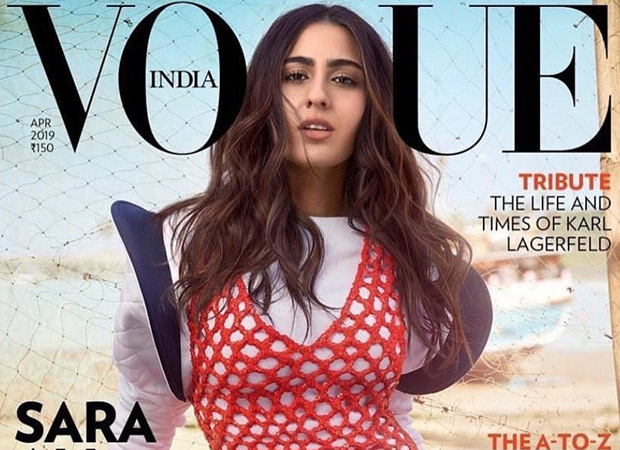 Recently, at an award function Sara won the title of best debutante of the year for her performance in Kedarnath. The actress made tremors across the Bollywood and is the only debutante to have not just one but two films in a span of just a month that shattered box offices. The actress made her second appearance on-screen within a span of two weeks from her debut release. Sara stole the hearts of the audience in Simmba. The film set the cash counters ringing, turning out one of the biggest blockbusters of last year. Sara is on the cloud nine with back to back success at the box office.

Recently, Sara made her debut on the magazine cover for the March feature.  The absolute beauty has left us jaw-dropping mesmerized and we can't simply take our eyes off from the picture. Ever since she made her Bollywood debut with Kedarnath, Sara is the much talked about diva in the industry for her great sense of humour and charming personality. The audience is looking forward to see the actress on the silver screen.  Sara Ali Khan will be next seen in recently announced Imtiaz Ali‘s next alongside Kartik Aaryan slated to hit the screen next year.