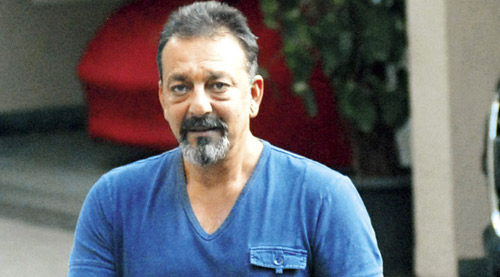 Sanjay Dutt is a reformed man. A rigorous jail term has done that to him. At the India Today conclave on Friday, Sanjay Dutt spoke feelingly about what jail did to him. "A jail term doesn't only take away your physical freedom. It imprisons your thought processes. You're no longer free to sit how you want, stand how you want..." Dutt revealed in halting broken, sometimes disjointed sentences.

Don't blame the disembodied thought expressions to prison. Sanjay Dutt has always been far from articulate. During interviews his favourite pause-phrase is, 'What to say?' And then he will tell you to fill up the vacant spaces in his quote.

At the Conclave anchor Rajdeep Sardesai didn't spare Dutt any of the gruesome details of his alleged crime. Did Dutt regret keeping ammunition on his property during the bomb blasts? Was he treated special in jail because he was a celebrity? Did all his friends from the film industry abandon him after the alleged terror links? Did he give his father Sunil Dutt a harrowing time?

To his credit Sanjay Dutt came clean on every topic. There was hesitancy, yes. But there was no question of avoiding the questions. This was a broken but healing man who had seen life at its cruelest and most basic level. Nothing will embarrass him, not references to toilet habits and certainly not talking about how unpalatable the food in jail was.

"The best place to lose weight is jail," joked Dutt, adding he had gone into prison with a potbelly but came out fit as a fiddle. Not that he was allowed exercise equipment. Dumb belles were forbidden since prison authorities felt he would use them to kill himself.

Not that Dutt was recommending jail as a substitute to the gym. What he does recommend for those serving prison time is a rigorous reading of the Holy Scriptures. While doing time Dutt read through the Mahabharat, the Bhagavat Gita, the Ramayan and he also read up all he could on Lord Shiva.

He has come out of prison a Shiva Bhakt. Also, a diehard champion of prison reforms. Dutt feels very strongly about the archaic laws, going back to the British days that govern prison conduct. To cite an example of how demeaning some of these rules are, try this. Every time a prison authority made his rounds Dutt and the other prisoners had to squat on the floor like bonded labourers were known to do before Zamindars.

Space is the biggest problem in prison. According to Dutt during sleeping hours there are brawls breaking out among inmates for changing their sleeping position. (None of the Karvatein badalte rahen saare raat hum romanticism permissible in prison).

What he seriously recommended were drastic reforms in prison protocol. And he is working towards those. Dutt has shown a keen interest in working towards prison reforms with the government.

There are also very serious talks of his prison experiences being put into book form.

If Sanjay Dutt delves into his prison time to create awareness about what prisoners have to face inside then he would do the nation a great service.

If Munnabhai can survive a prison term, lesser mortals may not fear what goes on inside unless he tells them in frank terms about the nightmare he encountered.