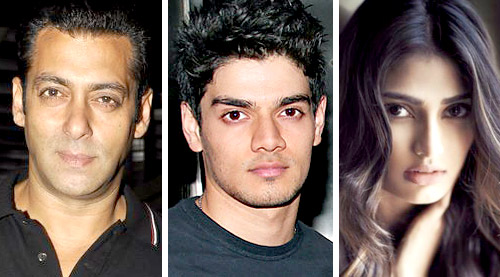 superstars were launched by their family when it came to mainstream commercial outings. However there are quite a few

star kids, especially the newer lot, who have taken a different road. Tiger Shroff was the last example where Sajid

Nadiadwala, and not Jackie Shroff, produced a film for him.

This year, the biggest launch pad for Sooraj Pancholi and Athiya Shetty, kids of Aditya Pancholi and Suniel Shetty, has

been laid down by Salman Khan. Though both Aditya and Suniel have been around for over two decades and have resources to

launch their children, they looked at Salman Khan to do the needful. As a matter of fact Suniel Shetty has been a hands-

on producer as well for quite a few films but he decided to wait before a correct launch came the way of his daughter.

Bhaijaan, everything seems to be going in the right direction for Sooraj and Athiya's Hero. They aren't alone

though when it comes to their fathers deciding to entrust someone else for introducing them to the world of glamour.

mettle with outside filmmakers first. A common trait visible is that there is a huge success ratio in such cases, what

when it came to their first attempt.

Salim Khan had been a successful writer and could well have launched Salman Khan, had the need arose. However, after

making a modest debut as a supporting actor in Biwi Ho Toh Aisi, Salman Khan was launched with much fanfare in

launching quite a few careers through his production house.

For at least a couple of years it was speculated that Amitabh Bachchan's ABCL would launch Abhishek Bachchan. Eventually,

it was J.P. Dutta who came on board and he produced as well as directed Refugee with Abhishek. The film was a

multi starrer affair made on a grand canvas, though after the initially hoopla, this really long film just about managed

to hit the average mark.

Kapoor [Father: Randhir Kapoor, Debut as a lead: Refugee with J.P. Dutta, Verdict: Average]
Kareena Kapoor's debut is pretty much a case of folklore. Though she had R.K. banner behind him, it's almost defunct

status meant that an outsider filmmaker had to launch her. She even shot for a few days, before walking out and making

way for Ameesha Patel. Meanwhile, an opportunity came in the form of 'Refugee' which was the launch pad created by J.P.

Just like Kareena, many expected Ranbir to be launched by the R.K. banner. This never happened, though Sanjay Leela

Bhansali rose to the occasion and decided to create the biggest ever launch pad for a Bollywood debutant. A much hyped

affair, Saawariya was in news right through its making. However, poor content coupled with competition with 'Om

Though Anil Kapoor had produced a few films under his banner and uncle Boney Kapoor was an established producer too,

Sonam Kapoor was actually launched through Sanjay Leela Bhansali. It was a dreamy launch no doubt with some dream sets

being created. However, the results were hardly in line with what Sonam would have expected in her first ever tryst with

Arjun Kapoor [Father: Boney Kapoor, Debut as a lead: Ishaqzaade with Aditya Chopra, Verdict: Hit]
Till date Arjun Kapoor maintains that he didn't want to be a burden on his father when it came to his Bollywood launch.

Well, he actually got the best of the lot, what with Yash Raj Films putting their money and roping him in for a three

film contract. Ishaqzaade was an unconventional debut as Arjun started his career with grey shades. However, this

rustic adaptation of 'Romeo & Juliet' was well accepted by audience.

Dhawan [Father: David Dhawan, Debut as a lead: Student of the Year with Karan Johar, Verdict: Hit]
With 40 films behind him, one would have expected David Dhawan to create a launch pad for son Varun Dhawan. That never

happened, though Karan Johar saw the spark in Varun and roped him in for Student of the Year. The actor was

clearly a star in the making and took complete advantage of the platform provided to him. The way he delivered got him

his second film Main Tera Hero where he worked with David.

Alia Bhatt [Father: Mahesh Bhatt, Debut as a lead: Student of the Year with Karan Johar, Verdict: Hit]
Bhatt family has been known for backing new talent like no other filmmaking house. However when it came to their own

house, daughter Alia Bhatt decided to do something different from the kind of outings Vishesh Films had to offer. A film

enough for Alia to enter big league with her very first film.

Though her family hadn't produced too many films, Sonakshi had seen the making of Mera Dil Leke Dekho quite

closely. If hardly anyone has heard about the movie is any indication, one can pretty much understand why Sonakshi waited

and debuted with Arbaaz Khan produced Dabangg instead. The film was a complete package affair for Sonakshi and her

pairing with Salman is now pretty much for the keeps.

Tiger Shroff [Father: Jackie Shroff, Debut as a lead: Heropanti with Sajid Nadiadwala, Verdict: Hit]
His parents had turned producers with films like Grahan and Boom which were no great shakes at the box

office. Given his standing in the industry, Jackie Shroff could well have produced a film for Tiger Shroff. However, the

family decided to trust Sajid Nadiadwala instead and allowed him complete control over the state of affairs. His debut

outing Heropanti was promoted well and turned out to be a good Hit.