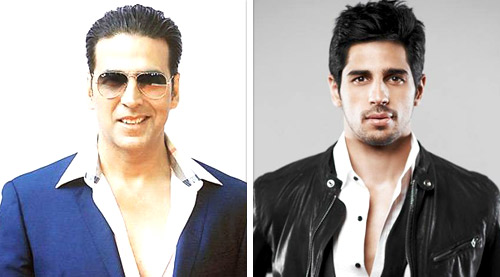 The verdict on Akshay Kumar's new riveting action-drama Brothers is out. Akshay Kumar and Sidharth Malhotra actually look like siblings!


Akshay Kumar couldn't agree more. "We are literally brothers from different mothers. We look the same, talk the same, and tell the same stupid Punjabi jokes. Our time together was so well spent that it's going to be hard to separate us after this film!"


However, Akshay Kumar is quick to point out that he and Sid play contrasting bros. "I am the matador. Sid is the bull. I play a strategic fighter. Sid is all brawn, I am all brain. This is what makes the whole twist so intriguing, we're two of a kind, same same but very different."


Akshay admits that physical resemblance was not the deciding factor in his solid unwavering equation with Malhotra. "It was important for the audience to realize that we may be blood brothers, we may look almost identical as brothers. But finally our physical appearance has to be different, as too our methods, our approach in the ring, our reason for fighting.


Akshay feels Sidharth is the sibling he never had. However there was no room for brotherly bonding beyond the sets.


Sighs Akshay, "If I was capable of bonding beyond work I would have done so. But on this film, neither one of us could move by the end of the day, so there were no late-night bonding sessions. But we got along so well on set that there was no need to carry our work pain to pleasure zones. We would both go home and ice our bodies to make ourselves capable of going through more pain the next day."