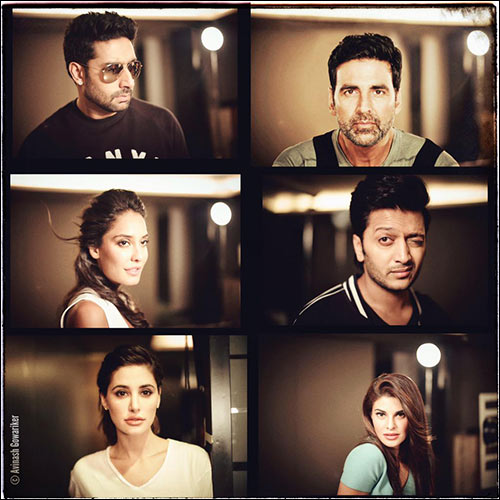 Its common knowledge by now, that the third installment in the Housefull franchise will feature a new addition to its cast in the form of Abhishek Bachchan. In fact the actor also stated that he would be heading to London on August 24 to commence work on the film. Later talking about the same Abhishek added, "I am actually very excited and nervous for Housefull 3, because contrary to what people think, the film and franchise actually has a huge fan following. So there are these huge expectations from me and I don't want to let the audience down."


Seen in the image are Akshay Kumar, Abhishek Bachchan, Lisa Haydon, Riteish Deshmukh, Nargis Fakhri and Jacqueline Fernandez sporting their respective looks in the film. Directed by Sajid- Farhad, Housefull 3 is produced by Sajid Nadiadwala, and is slated to release on June 3, 2016.