We all know that Salman Khan has always maintained his friendship with many in the industry even if they aren’t active in Bollywood. The actor has always expressed his immense love for them and yet again this time around, he did something special for his ex-girlfriend and now good friend Sangeeta Bijlani. The superstar decided to make her birthday special by not just giving her gifts, balloons and cakes but he also had a small get together of sorts with all his close friends. Needless to say, the photos from the bash have already found its way online. 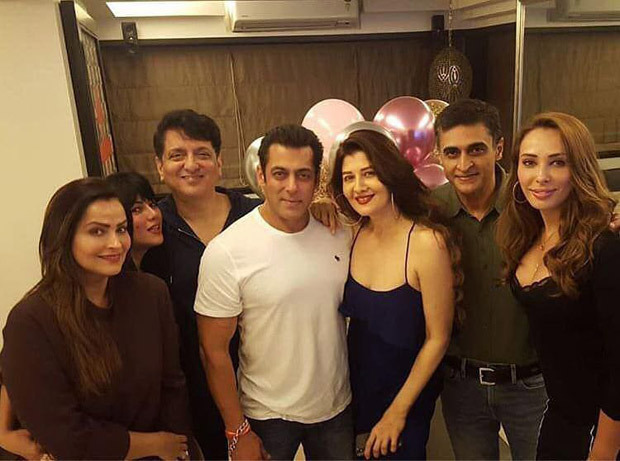 Salman Khan hosted a birthday bash for Sangeeta Bijlani on July 9 as the Bollywood diva turned a year older. Present at the fun event were Salman’s close gang of friends which included Iulia Vantur, Sajid Nadiadwala and wife Warda Nadiadwala, Mohnish Bahl, Daisy Shah amongst others. The photos from the bash found its way on social media as fanclubs of the actors started sharing it on Instagram:

Besides that, Sangeeta Bijlani too posted a solo photo of hers from the celebrations. On the other hand, Daisy Shah took to Instagram to share a special birthday bash for her close friend! Here, have a look:

Wishing you a magical birthday with wonderful surprises and cakeeee that ur stomach can handle @sangeetabijlani9 ❤️???? #meridostkabirthday

On the work front, Salman Khan is busy with Dabangg 3 that also stars Sonakshi Sinha, Kiccha Sudeep, Dimple Kapadia and Pramod Khanna. Directed by Prabhu Dheva, the film is slated to release by the end of this year.