We have reported earlier that Kiccha Sudeep is currently focusing on Dabangg 3. The actor has already started shooting for the film alongside Salman Khan, whereas Prabhu Dheva is directing this instalment of the Dabangg series. It seems that the trio was recently chilling with producer Sajid Nadiadwala and they were in a mood for some fun and dance. And needless to say, they were learning dance from the best – Prabhu Dheva! 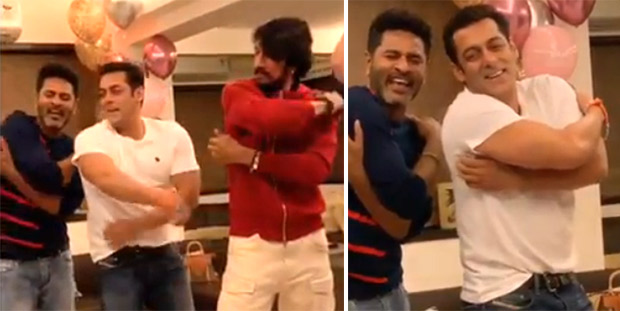 With Prabhu Dheva in the house, it doesn’t come as a surprise that when Salman Khan, Kiccha Sudeep and Sajid Nadiadwala came together, they decided to groove a little. They were seen dancing to the peppy chartbuster 'Urvashi' from Prabhu Dheva's film Hum Se Hain Muqabla (Hindi dubbed version of the Tamil film Kadhalan). The song has been one of the most iconic numbers from the 90s and this video of the three celebrities trying to recreate some of the steps from the film as Prabhu Dheva tries to teach them the nuances of it, will definitely leave you with a smile. Salman Khan posted the video of the dance on his Instagram page saying, “Dance class from the master himself . . Prabhu Deva @kichchasudeepa @wardakhannadiadwala.”

Dance class from the master himself . . Prabhu Deva @kichchasudeepa @wardakhannadiadwala

The song, ‘Urvashi' became a trendy chartbuster, not just in the South industry where it originally released but also in Bollywood. In fact, the song was recently given a contemporary twist and released as a music video featuring Kabir Singh couple Shahid Kapoor and Kiara Advani.

Coming to Dabangg 3, the film will feature Sonakshi Sinha reprising her role as Salman’s wife and Dimple Kapadia as his mother. Pramod Khanna will replace the late Vinod Khanna in the film after the latter’s demise.

Also Read: LEAKED VIDEO! Salman Khan talks about his EX-GIRLFRIENDS on the sets of Nach Baliye