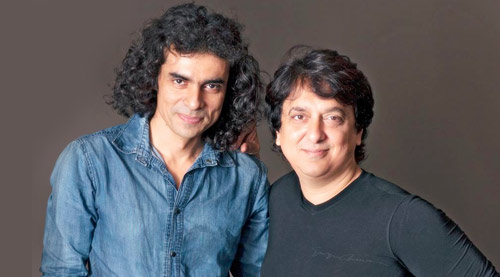 Sajid Nadiadwala is on a roll. If last year was terrific for him when he made his debut as a director with Kick that entered the Rs. 200 crore club, as a producer he delivered a Rs. 100 crore super hit 2 States, he also had a Rs. 50 crore success Heropanti that featured rank newcomers. This isn't all, as he also enjoyed the critical acclaim that came with Highway. While this year too started well with Phantom, he is now all set to arrive with Tamasha where he reunites with his Highway director Imtiaz Ali.

Needless to say, the filmmaker is enjoying good collaboration that he shares with his producer Sajid.

"The great thing about Sajid is that since he is also a director, he knows how other directors would like to work in a creative environment," says Imtiaz, "He is a very intelligent man. Being a director as well, he knows the value of creative freedom that a filmmaker wants."

This is the reason why Imtiaz never felt the pressure of working with a producer who had delivered a massive blockbuster himself just a year ago.

"There was hardly any discussion that he called, though at times I would ask him what he thought of the story or the characters. He would revert when asked, but again as a friend and not as a producer. He understands how films are made and that's the best part about him," Imtiaz adds.

This is the reason why Sajid never blinked an eye when it came down to shooting Tamasha at the virgin locations of Corsica, France. Since no other Bollywood film has been shot there ever before, it was a new territory that the team was entering. However as a producer, Sajid not just gave a go-ahead but also made sure that Imtiaz and the technical crew got everything that was needed to make the shooting experience a breeze.

"And guess what; even French movies haven't been there for the shoot," chuckles Imtiaz, "It was an absolutely unexplored terrain and Sajid still made it possible. All of this can sometimes become very challenging for producers but Sajid said that if you I wanted to go there, he would make it work. This isn't all as there is also an outdoor shoot held in Japan and Sajid simply said that whatever you need, I will get it for you. He was always standing beside the team to make it all happen in a jiffy."

No wonder, despite its elaborate stage and setting with actors as busy as Ranbir Kapoor and Deepika Padukone, the film's shoot went on smoothly with no hiccups whatsoever.

While Ranbir and Deepika enjoyed their 'matargashti' in the Mediterranean island, one now waits to see how it all looks on the big screen.