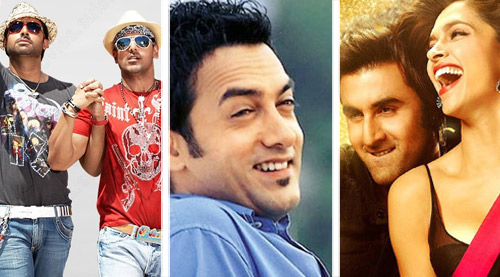 With the sequels to some popular films really making it big at the box office (Pyaar Ka Punchnama 2, Tanu Weds Manu Returns, Welcome Back, Singham Returns), we believe that the audience has started accepting this trend with open arms. Currently there are many such installments which are in the making and this inspired us to write this article on the sequels we would love to see. These handful of films have attained a sort of blockbuster status in the market and a little alteration is what they need:

Dostana: Well, we all saw the homosexual twist that tickled your funny bone in the Karan Johar production Dostana. And now a hilarious sequel with a role shift - two women and a man! Quite dishy but may be the wrath of the censor board would strike hard on it! Nevertheless, it's worth giving a try. (PS: Speculations on the film's sequel are on but there has been nothing
concrete on the same)

Films whose sequels we would love to see

Dil Chahta Hai: Recently Alia Bhatt stated in an interview that she would love to be a part of Farhan Akhtar's boyish film Dil Chahta Hai, provided it's modified as a chick
flick along with Shraddha Kapoor and Parineeti Chopra co-starring it. We say it is not a bad idea at all! Considering the contemporary generation of independent, ambitious and adventurous women, this film too will definitely be a fun roller-coaster ride.

Yeh Jawaani Hai Deewani: Bunny aka Kabir, the carefree wanderer and Naina, the homely nerd/doctor - a married life of two people from different worlds. Their romance, struggles and an urban take on modern fast-paced relationships - this masala should be enough for yet another Ranbir - Deepika love story to take off! What say?

Kahaani: Unlike a continuing sequel, Kahaani should be set in a different place with a different star cast but may be with a thrilling twist just like its prequel. Considering the title of the film (which means story), the film has a lot of scope to explore and experiment with topics and subjects that can prove to be yet another spine chilling experience.

Dilwale Dulhaniya Le Jayenge: It's been more than 20 years but the film hasn't lost its charm. Let's not try to spoil it by remakes but what about a sequel - a new take on romance
that represents the current generation? The kids of Raj and Simran who respect Indian culture but yet have a new view towards the modern society, a sequel to Dilwale Dulhaniya Le Jayenge,
can represent a young love story representing the new age values.

Mr. India: It's a known fact that Shekhar Kapur is already contemplating a sequel to Mr. India. Amidst superhero and superhuman films, Mr. India, a fusion of technology and high voltage drama will be a refreshing change. Let's hope we get an announcement soon about this one!

Andaz Apna Apna: Cartoons to Aamir Khan-Salman Khan being a part of the second installment, Andaz Apna Apna 2 is probably the most speculated sequel since the past few years. However, by now we definitely have a hint that a second installment is definitely not being planned any time soon but we would like to give a suggestion - the film should definitely be filled with nonsensical but clean jokes and do not omit Crime Master Gogo because we love him!

Queen: Considering the current condition of women in India, a film like Queen teaches you to stand by your beliefs and find your identity but in a light hearted manner with far less melodrama. Continuing Queen as a series, a collection of stories of many women who have risen up to some old and patriarchal practices but in the same light hearted manner with a humane touch would be a good attempt.

Jab We Met: The reason for this is very simple - Geet! We can't get enough of her antics and wouldn't you want to know how the serious Aditya Kashyap manages to live a life with the crazy and free spirited Geet. A glimpse of their nok-jhoks, love banters and maybe the return of Anshuman! With so many characters in Geet's life, definitely there will be enough fodder for a
sequel.