Last Updated 20.09.2021 | 7:36 PM IST
feedback language
follow us on
Bollywood Hungama » News » Bollywood Features News » Rishi Kapoor shares a pic of the person he wants Ranbir Kapoor to get married to, and it’s not Alia Bhatt!

Ranbir Kapoor is basking in the glory of the fact that his latest movie Sanju has become super-duper hit and why not? It sure is well deserved and it is safe to say that Ranbir finally has got some box office redemption after lot of his films didn't do well. It sure is a time to celebrate for Kapoors! Ranbir’s dad and veteran star Rishi Kapoor also can't stop praising his talented son but we know that he has a quirky sense of humour which he so unabashedly flaunts on social media! This time he tickled our funny bone with a funny post about Ranbir’s marriage which cracked us up! 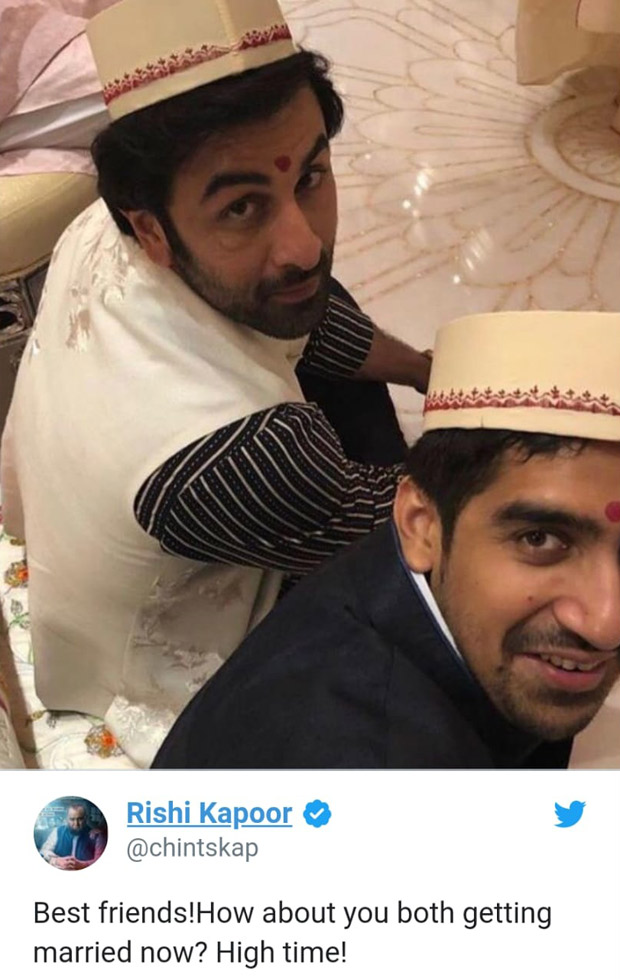 He has posted a picture of Ranbir with his best friend and Brahmastra director Ayan Mukerji where both are praying, dressed in traditional garb. Rishi casually put up this picture on Twitter with a caption, 'Best friends! How about getting married now? High time!” Ha ha if this doesn't make you chuckle, what will? Later, Rishi raised a toast to Ranbir for Sanju from flight and said how proud a parent he is! He signed off with 'aur accha kam karo.’ Ranbir has gone on record telling us that he shares a complicated relationship with his dad and he doesn't get praised too often by him but when he does, it's very special.

Sanju directed by Rajkumar Hirani and co-produced by Vidhu Vinod Chopra released on Friday, June 29 and is playing in packed houses.

Best friends!How about you both getting married now? High time! pic.twitter.com/DnWEmN8nI7