Last Updated 16.01.2022 | 6:16 PM IST
feedback language
follow us on
Bollywood Hungama » News » Bollywood Features News » Ranbir Kapoor and Sanjay Dutt caught in a candid moment as they catch up ahead of Sanju release

One of the highly anticipated films of the year is Sanjay Dutt biopic titled Sanju starring Ranbir Kapoor in the lead. The film, helmed by Rajkumar Hirani, will tell the tale of the bad boy of Bollywood who went through craziest phases in his life in front of the limelight. From being a star kid to big Bollywood debut, from drug addiction to assault rifle possession, marriages and several affairs to the dark side of Bollywood, everything will be showcased in the upcoming film. With two days for the release, Ranbir and Sanjay caught up with each other over dinner 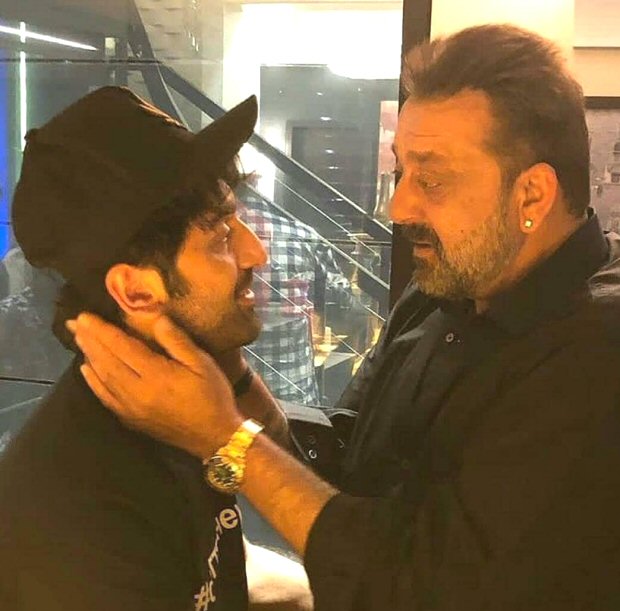 Ranbir Kapoor and Brahmastra co-star and rumored girlfriend Alia Bhatt visited Sanjay Dutt's residence on June 25th night for dinner. Both of them were snapped in black sweatshirts but arrived in different cars. Later in the night, Sanjay hugged Ranbir and the moment was captured. In the picture, the actor is lovingly holding RK's face as the young actor smiled. The dinner party also saw Sanjay's brother-in-law Kumar Gaurav and Sanju director Rajkumar Hirani.

Sanju depicts the life of Sanjay Dutt right from his younger days to his conviction. While Sanjay Dutt’s life, time and again made headlines, a lot of unbelievable aspects of the actor’s life yet remain untold. Rajkumar Hirani’s Sanju promises to bring to the forefront the unabashed details of the actor’s life unfiltered highlighting aspects like drugs, women, relationship with parents and friends, and inner conflicts.

Written and directed by Rajkumar Hirani, the film also stars Paresh Rawal, Manisha Koirala, Vicky Kaushal, Sonam Kapoor and Dia Mirza amongst others. Produced by Vinod Chopra Films and Rajkumar Hirani Films in association with Fox Star Studios, Sanju is all set to be released on June 29, 2018.