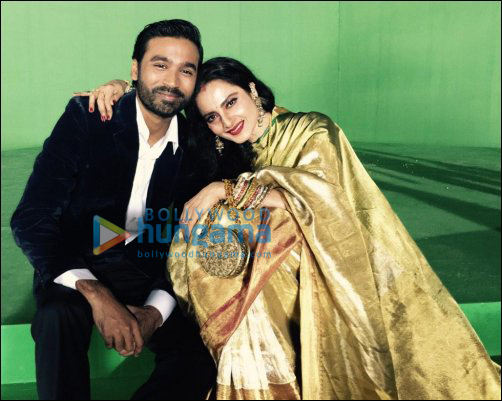 This is one dream casting coup of sorts for which every Bollywood lover has been waiting with bated breath. We are indeed talking about the casting of the legendary Amitabh Bachchan alongwith the ageless beauty Rekha.


Even though there have been several speculations over the years about the two stars doing a film together, nothing seemed to be materializing. However, R. Balkihas cast Rekha his upcoming Amitabh Bachchan starrer Shamitabh, which also stars Dhanush.


It was apparently, Dhanush, who let the cat out of the bag by tweeting an image of Rekha along with him with the caption "LOOK whom I'm sharing screen space with in shamitabh. The one and only REKHA JI!!! #beautyforever".


While there are no details available about the character of Rekha in the film, all that one can say is that this is one film (Shamitabh), which will be one of the most eagerly awaited film, for reasons best known to everyone.


Shamitabh, which is being directed by R. Balki, also marks the acting debut of Kamal Haasan's daughter Akshara Haasan and the much acclaimed director Mahesh Bhatt.