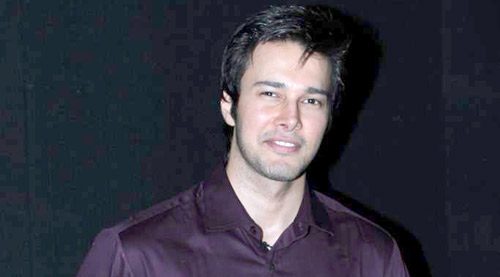 He made a good debut in horror flick 1920, a box office success. He followed it up with another credible act in Phhir and then played a triple role opposite Karisma Kapoor in Dangerous Ishkq. However, in none of the three films he managed a song and dance routine for himself.

Well, not anymore as for 'the first ever masala film of his career' (in his own words), Rajniesh has got the opportunity of putting on his dancing shoes and letting his hair down. Well, literally!

"Yes, these dances have turned out to be good for me. Choreographer Ganesh Acharya was the one who first told me to do the film. When I stepped in then he further motivated me to go all out for dancing. I have usually been a 'baraati' dancer, but then he ignited a spark in me to go all out when it came to filmy dancing. He told me to just keep that faith in him. Since he has seen me dancing before, though in whatever capacity, he was sure that I would do fabulous in the film," says Rajniesh Duggall who did have a guest dance appearance in Main Krishna Hoon, which also had a special appearance from Hrithik Roshan and Katrina Kaif.

He is particularly fond of a Bappi Lahiri number in Spark which is titled 'Pallu Sambhaal Gori' that obviously makes one remember yesteryear evergreen chartbuster 'Chunari Sambhal Gori'.

"It has been an amazing song and I too discovered a new side of mine while doing the song," says Rajniesh Duggall in a cheerful tone, "Though the film has a lot of action too, I knew that wohtoh ho jaayega. But then dance is an art in itself; I knew I would have to work on it a little more. Yes, my body has a rhythm due to my action orientation. I had to take it forward now for the song-n-dance affair as well."

To his credit, there is quite a handful that he got for himself, what with the first song from the film, 'Ishq Da Virus Lagaya', already unveiled. While Mika has sung this one, what makes it special is the fact that it is a 'bhangra' track shot on the streets of Germany no less.

"Well, you have to go crazy for a crazy number like this, isn't it," Rajniesh smiles, "I had fun dancing with Subhashree (Ganguly). Though this is her first Hindi film, she has gained quite some experience in her Bengali films. To have her dance to the Punjabi beats is fun. As for me, I went ahead as per Ganesh Acharya's instructions. Now you would see a different side of mine in the hip-hop number that has been sung by Bappi da."

Guess that would bring in a 'spark' of its own!