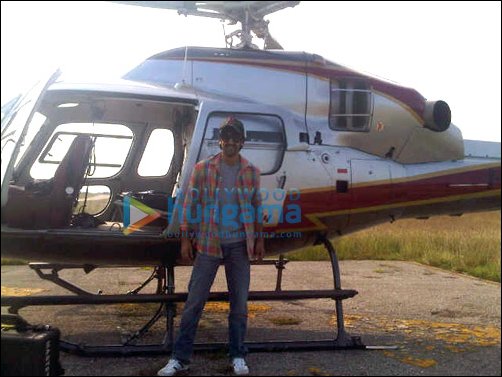 Ranbir Kapoor found himself on the other side of the camera when he had to briefly step into Imtiaz's shoes as the director of a small sequence in his own film! The actor, who had assisted Sanjay Leela Bhansali on Black before starting his acting career, once again found himself with the camera during a shoot for his upcoming film Rockstar.

Director Imtiaz Ali and team were shooting a complicated concert sequence in Verona, Italy with a crowd of almost a 1000 people. The on-ground shots required a great deal of coordination and Imtiaz also required aerial shots of the same crowds. However, there was a problem - Imtiaz could not be in two places at the same time and he required every member of his team on the ground with him.

That's when Imtiaz asked Ranbir to step in. Says a source from the direction team, "Imtiaz has always encouraged Ranbir with his goals, even gifting him a view-finder for his birthday. However, there were many complications in this shoot. Firstly, Ranbir has a great fear of heights and this required him to look down from an open chopper thousands of feet above the ground. Secondly, there would be no Indian crew, no camera attendant, just Ranbir and a foreign DOP."


Despite these challenges, Ranbir managed to do a great job. "He confidently went on the chopper and got the perfect shots; which are all in the film for us to see," the source adds.


Must say this Kapoor dude is indeed a Rockstar in ever sense of the term.