Priyanka Chopra Jonas, who is rising and hustling since the age of 18, is currently busy with the promotions of The White Tiger starring Rajkummar Rao and Adarsh Gourav! Now, slaying on the cover page of Marie Claire for its Spring 2021 issue, the actress is making waves in the West! 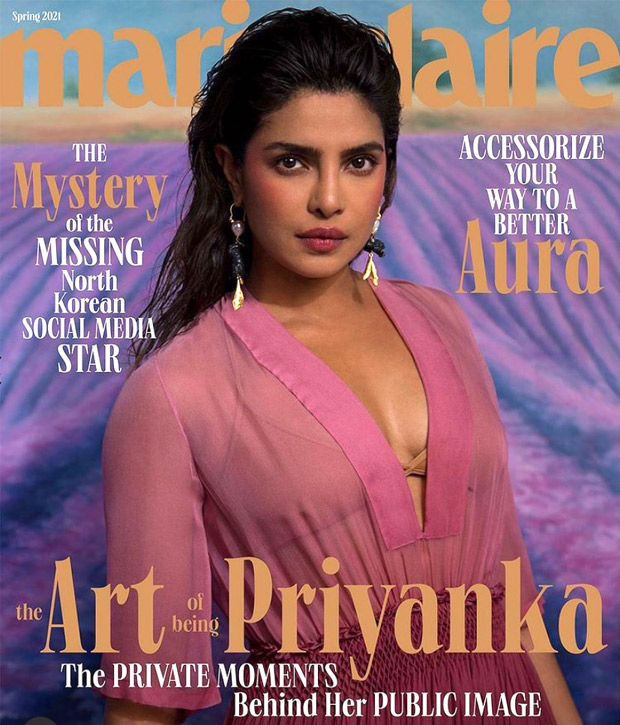 As we all know the Spring vibes are all about pretty pinks and lavender and that's how Priyanka Chopra is beautifully synchronizing in all the looks! All the stunning looks are styled by Joanna Schlenzka with the hint of vitality colours like orangey red, peachy pink, even in one of looks, the outfit is styled with the blossom ruffle! Her hair is done by Issac Poleon and her enduring makeup is done by her favourite Ninni Nummela. Gracing two sets of the covers, the actress has already kicked of the New Year on a big note.

Inside the new issue, the actress and entrepreneur is lighting on her framework in Netflix's The White Tiger and unveiling her full list of upcoming projects, along with several films, a hairline, and her debut book. The actress has had “a rare break due to COVID, but she eventually noticed that having too much time on one's hands could lead to a desire to return to professional life then. It was the opposite of what I would normally do. I love staying in bed in pajamas. It’s my favorite thing,” she said. “But when I had so much time to do that, I didn’t want to do it as much. I saw myself craving a routine.”

On spending time with her husband Nick Jonas, she said “Both of our schedules are so crazy individually that there was no world in which we would have ever had six months together. It only took a global pandemic for that to happen.”

We all must be familiar with the fact that her father has been the greatest motivation, so on independent thinking and motivation. She further said, “My dad used to say to me, ‘Whether or not you do something about your opinion, you need to have one. You always have to have an opinion. It inculcated independent thought’.”

She also mentioned her evolution into a better person. “For that girl who was so scared, I’m proud of the person that I evolved into. I dealt with a lot, and I came out thriving. I want little girls around the world to think about that. It doesn’t matter where you come from; it doesn’t matter what your circumstances are. Your grit matters, your ambition matters, your perseverance matters.”

On the work front, Priyanka Chopra has already wrapped up two Hollywood projects – The Matrix 4 and Text For You.

Also Read: Priyanka Chopra is all about the yellow powersuit during The White Tiger promos