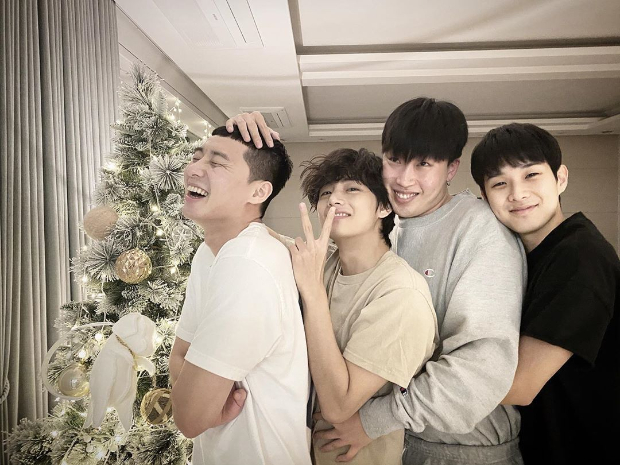 "Although the title is Parasite, I think the story is about co-existence and how we can all live together," Song said, via translator Sharon Choi. "I am so honored to receive this award in front of such amazing actors that I admire. I will never forget this beautiful night."

"The film Parasite is a dark comedy, a thriller and a powerful metaphor," Song Kang-ho told the crowd. "It depicts a class struggle taking place, all under one roof, where some aren't even aware that a struggle exists," Park So-dam said while introducing the film to the audience. "We are so honored to be nominated tonight for Cast in a Motion Picture," Choi Woo Shik concluded.

It was a night to remember as while the cast of Parasite was overlooked at all the award show shows including Oscars 2020 where the film received 6 nominations but none for the cast of the film. But, Choi Woo Shik has been receiving tons of appreciation from his industry friends.

Known to be part of Wooga squad, Singer V of mega-famous band BTS, shared two videos on their official Twitter account where he is hanging out with Woo Shik in Los Angeles. Walking down the beautiful streets of LA, V congratulated him on his win. He also shared another video where the two of them were enjoying snacks at a park. BTS is also in LA to begin promotions for Map Of The Soul: 7 album.

The congratulatory message continued from South Korean actors Park Seo Joon and Park Hyung Sik (who is currently serving in the military) and Peakboy. All of them are part of the Wooga squad. Taking to their respective Instagram accounts, they shared photos of Woo Shik to congratulate him.

During the backstage interview after their win at SAG Awards 2020, Choi mentioned that there are tremendous legends out there in foreign countries who are doing great work. "Other than us, there are so many legends out there in foreign countries. I really truly hope that after this moment, maybe next year, year after, we can see a lot more casts (from other foreign/Asian films).”

ALSO READ: Parasite director Bong Joon-ho: “I don’t think Marvel would ever want a director like me”