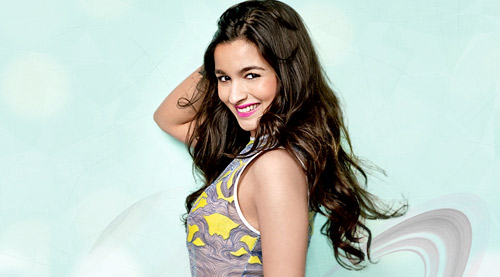 The little girl has become a big star big star now...is that a tough role to play?
I

wouldn't call myself a big star....not yet anyway. To be honest, I feel I have a very long way to go. Whenever I am tempted to take a break from my

hectic schedules, I end up working doubly hard because I feel I haven't earned myself a break as yet.

You mean you feel guilty when you are not working?
I do. Yes, I've to admit I do. I am very passionate about cinema, and now singing.

I don't have time for my friends and family. But when I am with them it's just fine. I went on a 11-day holiday with my sister to Paris and London

after 2 States released. So I'm not complaining. Having a family that's part of the entertainment business helps. Because they understand

How was the holiday in Paris?

I was very irritated over there by the lack of work. My fingers were itching and I was restless. But I was working out during my holiday like mad

because we had to shoot a song for Humpty Sharma Ki Dulhaniya when I returned. So at least there was something to do while I was

holidaying. But because of the song I had to diet and I felt, what was the point going all the way to Paris eating salads?

Are you heavily into dieting?

No I don't want to be skinny. But if I've to shoot a song I need get toned. Right now I am not getting time to work out. But soon I intend to get

some muscle on me. I think I look too young.

Congrats, you are the Indian entertainment industry's youngest workaholic.
(Laughs) I

guess that's one of the things I've inherited from my dad. My father is a no-bullshit kind of person. So am I.

Your father is very frank. He never lies?

He is very frank. But saying he never lies may be going too far. We all have to lie at some point or the other. But he calls a spade a spade. And I'd

like to believe I am like that. One thing that I really admire about my father is his outstanding willpower. He gave up alcohol 25 years ago and

That was because he felt he was creatively burnt out. But giving up alcohol was really tough on him. And he also gave up potatoes, though he

loved them. He would fast during Ramzan because he believes abstaining from food would make him a stronger person.

I'd love to see

you in a remake of Daddy with your dad directing again?
I don't think that would

ever happen. Unless my sister Pooja convinces him. She's the strongest person in the family. And if it's anybody who could convince my dad it's

Tell me about your adoration of Kareena?

I am a major diehard Kareena Kapoor fan. What I've loved about her right from her debut film Refugee is that she's always effortless, whether

doing comedy or drama. She doesn't try too hard to do or be anything. She's a natural. And her eyes are a window to her. She is one of her kind.

I'd like people to say the same thing about me.

Your character in Student Of The Year was a carryover of Kareena from Kabhi Khushi Kabhie Gham?

A lot of people seem to think so. I don't believe my Shanaya in SOTY wasn't like Poo in K3G. Maybe they both cared about clothes and looks.

Other than that, there is so no similarity. And comparing me to Kareena is fair to neither of us. She came into the industry very long ago. I've just

arrived. Such comparisons put a lot of pressure on me. But it's inevitable, I guess. Even Varun Dhawan is compared with Govinda. I can only smile

One of my biggest drawbacks as an actor is that I think in English. I wish I could think in Hindi. Varun thinks in Hindi. When you do that your entire

personality changes with the character. I learnt the importance of thinking in the character's language from Revathy M'aam. When she was

playing my mother in 2 States she'd confess she was talking in Hindi but thinking in Tamil.

Who helps you to choose your film projects?

I go with my own instincts. But I do take my Dad's help. Apart from him the one person I consult is Karan Johar. Usually Karan and I are on the

same page about what films I should do. I don't ever want to do film for the wrong reasons

There were a whole lot of jokes about your IQ level after your wrong answer on Karan Johar's show?

I don't get worked up by these comments. I don't take myself that seriously. But I don't think I am stupid just because I got one answer on Karan's

You are not. Stupid people don't become so successful at such a young age.
(Laughs)

It's fine. Let them have fun. I'll change their opinion on my IQ with my performances. I swear to God I am not bothered.