Actor Mohit Marwah tied the knot with his girlfriend Antara Motiwala amidst an on-going splendid affair spanning three days at the Waldorf Astoria in Ras al Khaimah, UAE. While the mehendi shenanigans regaled us with some enchanting Manish Malhotra creations, the cocktail and the sangeet functions of Mohit Marwah and Antara Motiwala wedding gala witnessed yet another style fiesta. Making their stunning presence felt were family and friends including Arjun Kapoor and Rhea Kapoor, Khushi Kapoor. Additionally, Karisma Kapoor, Sridevi, Karan Johar, Kiara Advani, Athiya Shetty and Manish Malhotra were also present. The location boasts of pristine views of the Arabian shoreline and this destination wedding certainly bore all the markings of a big fat Indian wedding. Also, this wedding comes closely on the heels of the wedding festivities of Akshay Marwah who is Mohit Marwah’s younger brother in Abu Dhabi last year.

Actor Mohit Marwah debuted with the 2014 flick, Fugli with Kiara Advani and was last seen in Raag Desh in 21017. The shaadi shenanigans of the Marwah and Kapoor family dominated the scene on the social media, here’s a recap of the style fiesta that transpired at the #AntuMoh pre-wedding festivities of the cocktail, sangeet night and jaimala.

The bride twirled in an exquisite embroidered pale pink Manish Malhotra ensemble featuring a cold shoulder cut choli and pseudo dupatta cascading on either side attached to the back straps. Wavy hair, subtle makeup and diamond jewellery rounded out her look for the sangeet. 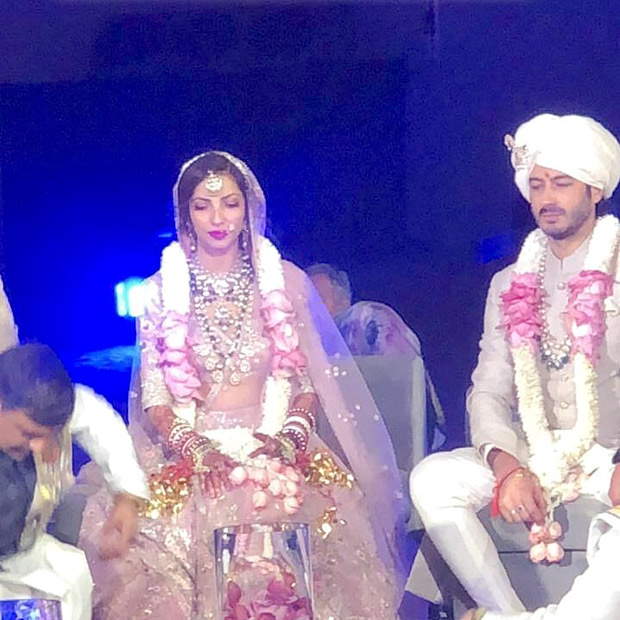 For the jaimala and the wedding, Antara donned a champagne pink intricately embroidered ensemble with heavy jewellery, glossy makeup and a dupatta covering her elegant updo. 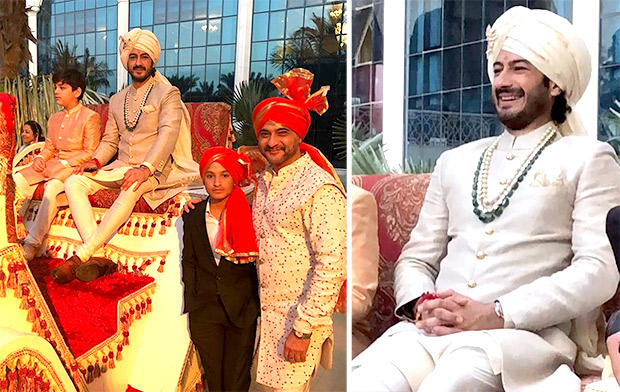 The groom Mohit donned a beige coloured sherwani with a green beaded necklace and a well-groomed beard. 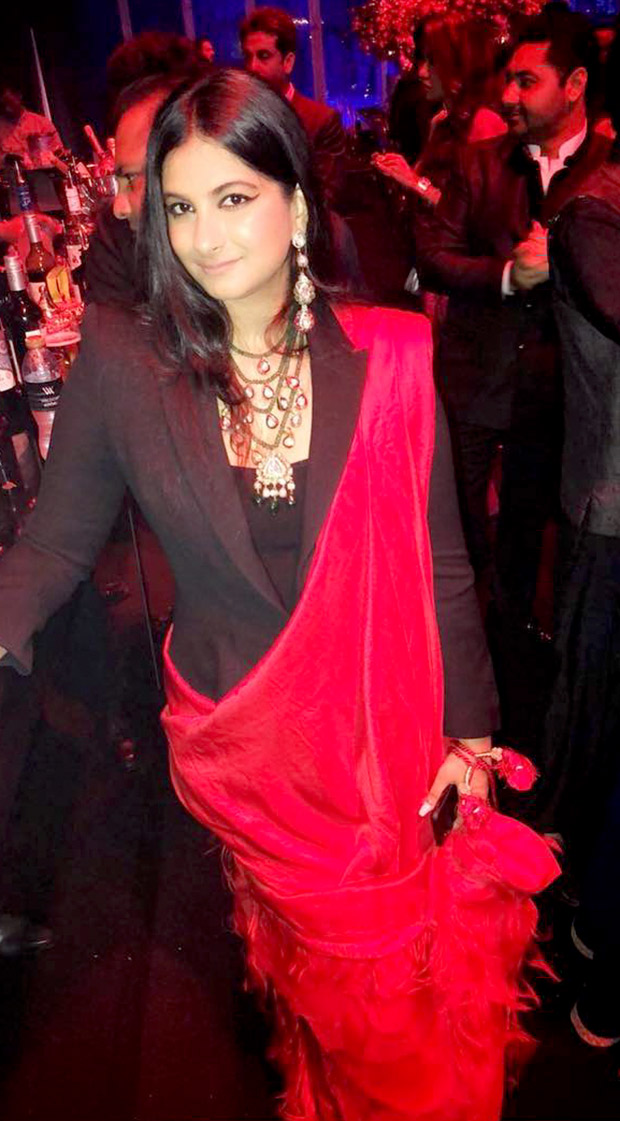 With a penchant to do the unexpected, Rhea Kapoor threw us a curveball with her ensemble for the cocktail night. The producer and stylist draped her Alexander McQueen suit with a brilliant red Anamika Khanna saree. Winged eyes, nude pink lips, layered necklace and sleek hair left open rounded out her look. (Also Read: Daily Style Pill: Keep Calm and Couture Yourself! Just like Sonam Kapoor!) 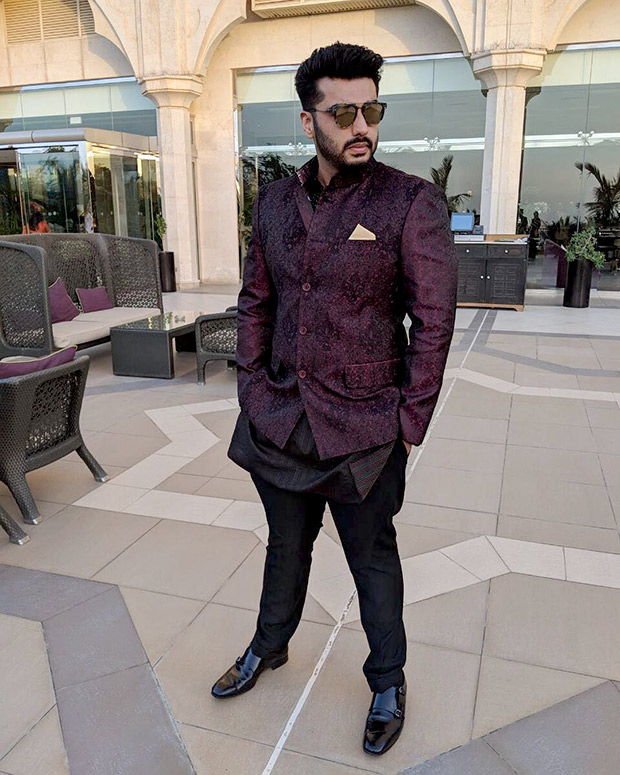 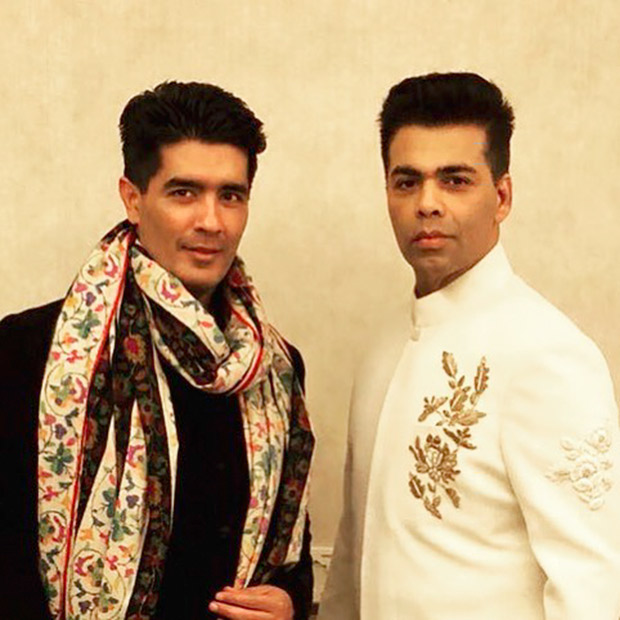 Picking out a white Manish Malhotra embroidered bespoke ensemble with gold embroidery, Karan Johar did not skip a chance to pose with his BFF Manish and flaunt that pout. 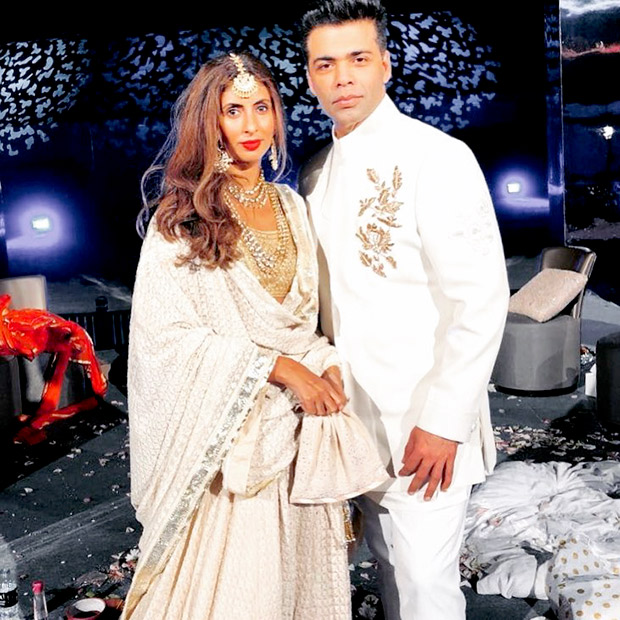 He also posed with his other BFF Shweta Bachchan who wore a white lehenga set replete with chunky jewellery and bright lips. Needless to say, the duo had a stunning twinning moment. 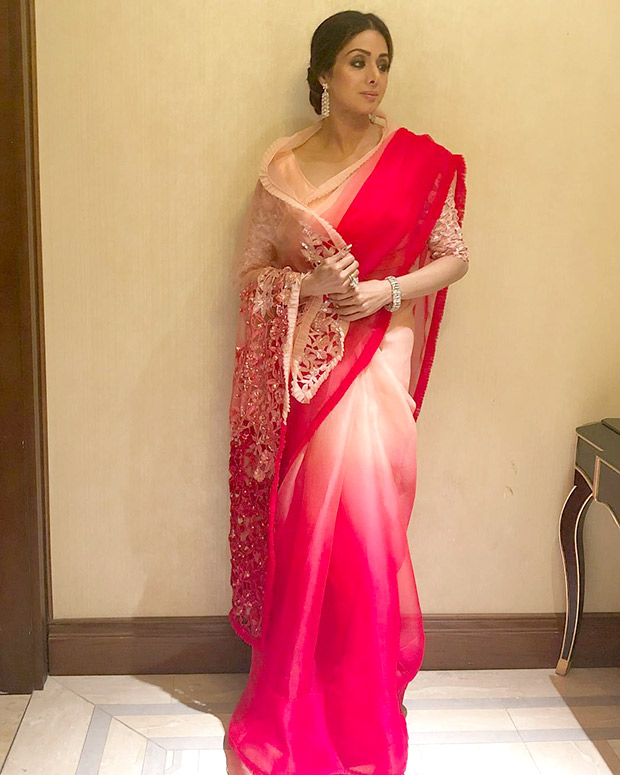 For the sangeet night, Sridevi donned a stunning pink shaded organza saree by Manish Malhotra featuring intricate cutwork embroidery and teamed it with a matching blouse. A pair of statement earrings, a soft hairdo and subtle makeup rounded out her sleek look. 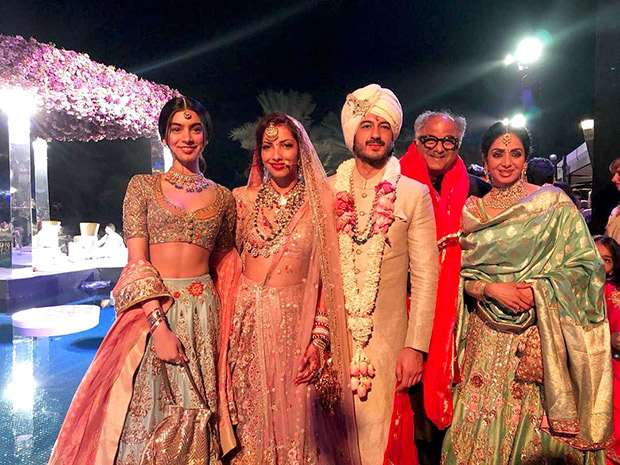 For the wedding, Sridevi Kapoor donned an exquisite lehenga replete with a Benarasi dupatta with heavy jewellery, a hairdo and glossy makeup. 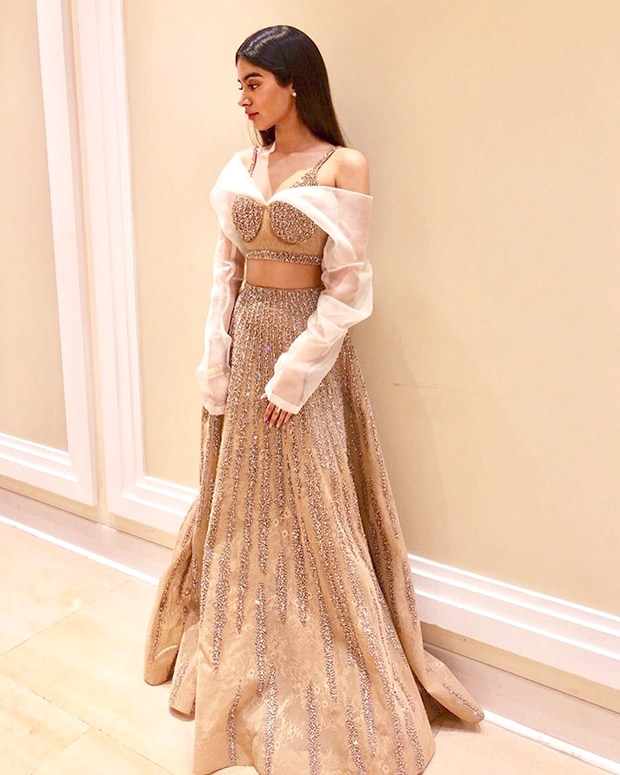 The teenager Khushi wore a Falguni and Shane Peacock creation featuring a corset shirt with an embroidered lehenga. Delicate earrings, sleek hair and sharp makeup rounded out her look. 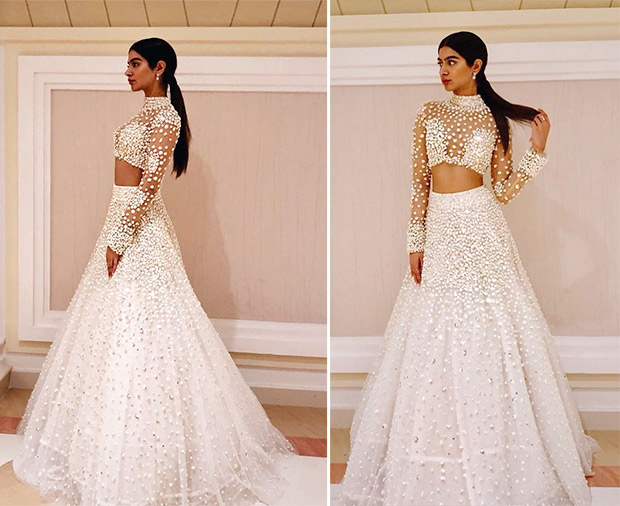 Getting her ethnic game on for the summer with a white creation from the Summer 2018 Manish Malhotra wedding couture collection. Delicate earrings and a low back ponytail and minimal makeup rounded out her look.

For the wedding, Khushi flaunted a heavily embroidered lehenga set with a choker, maang tika, an updo and a glowy makeup. 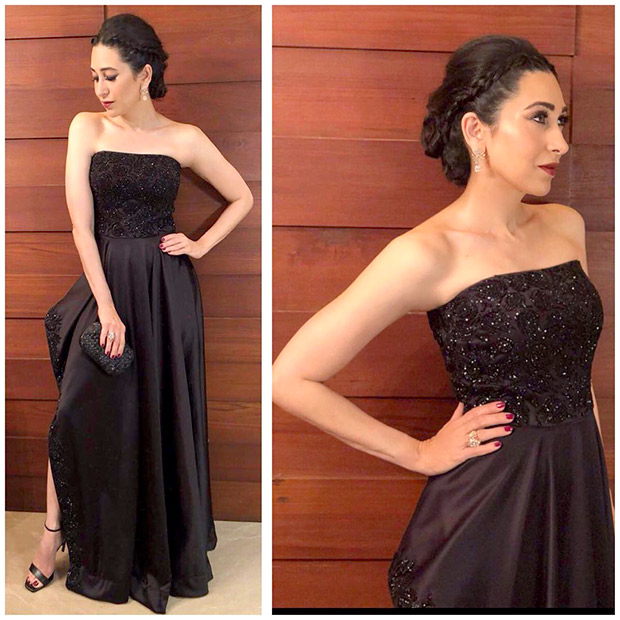 For the cocktail night, Karisma Kapoor kept things classy in a black strapless Namrata Joshipura ensemble with YSL open-toed sandals rounding it out with earrings from Jet Gems, a braided updo and minimal makeup. 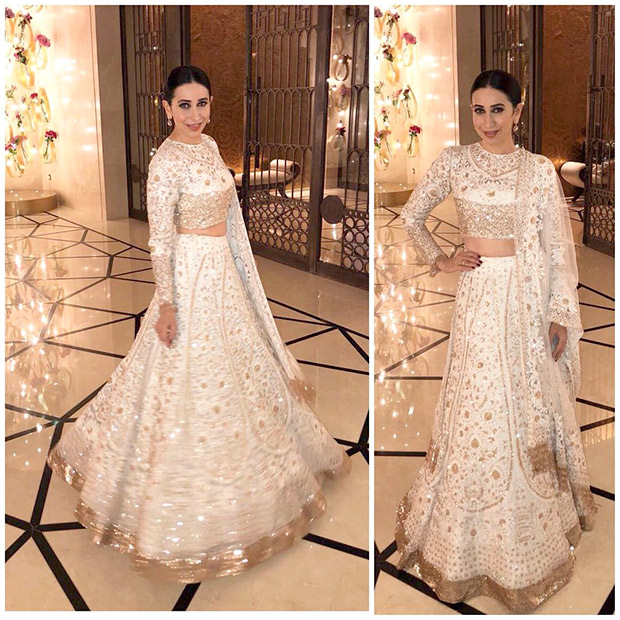 For the sangeet night, Karisma wore a Manish Malhotra gold and white creation with jewellery from Jet Gems. A chic hairdo and minimal makeup rounded out her look. 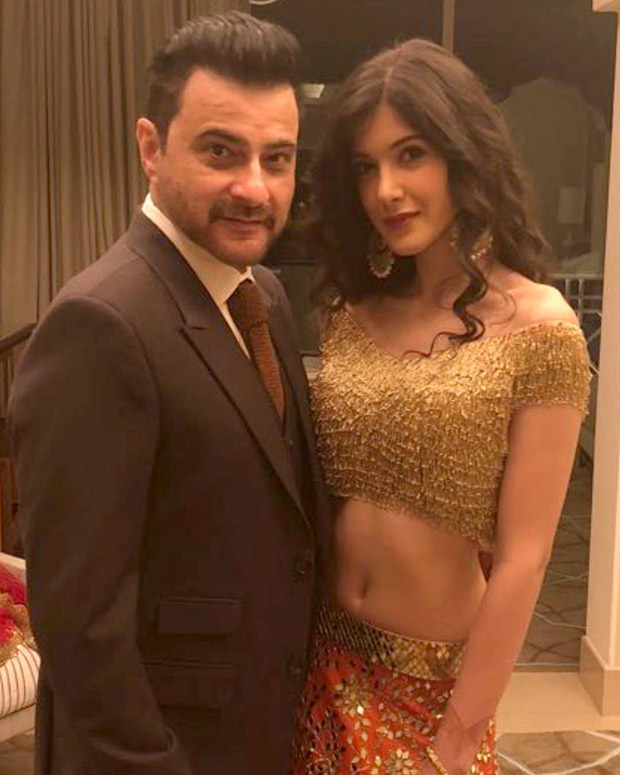 The lovely daughter of Sanjay Kapoor danced to ‘Nachde Ne Saare’ from Baar Baar Dekho and Bom Diggy for the sangeet night wearing a Seema Khan floral and gold creation.

Sans accessories and a stunning makeup, Shanaya flaunted her dancing skills to the hilt. 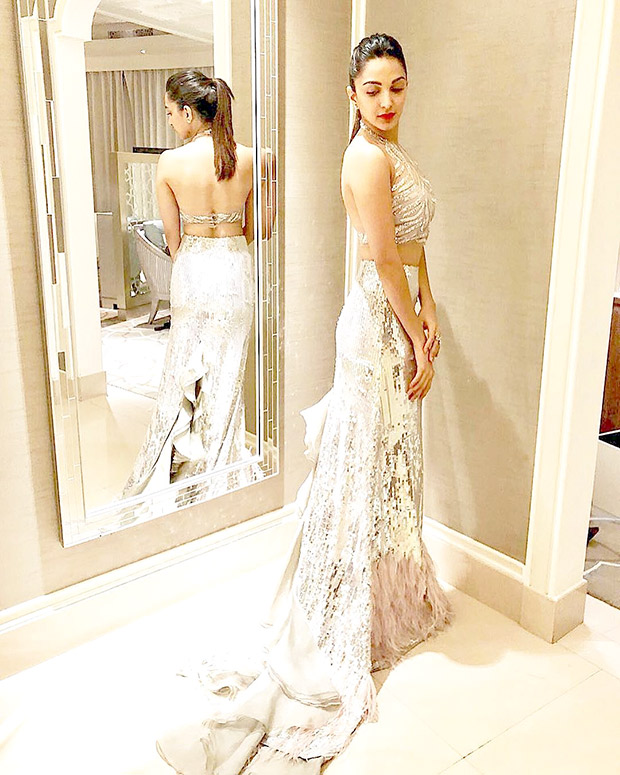 It was yet another Manish Malhotra ensemble for the cocktail and sangeet night for Kiara Advani. The metallic sheen feather ensemble was glamorous to the T and we loved how Kiara upped the look with a chic low back ponytail and bright lips. 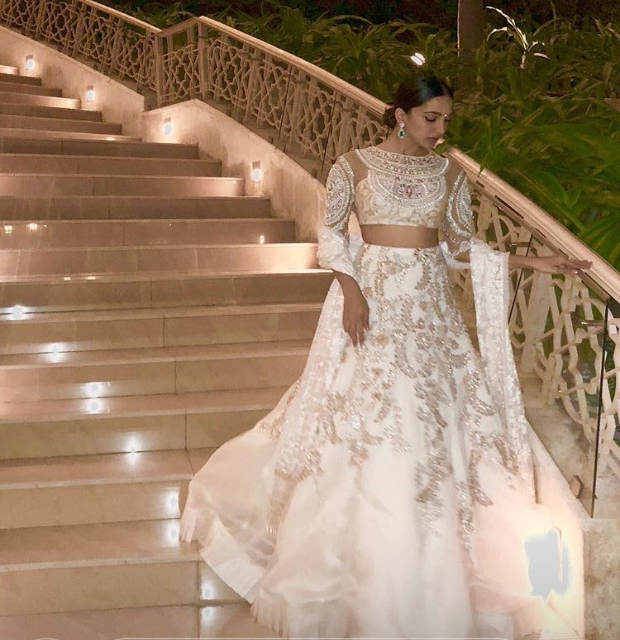 For the wedding night, Kiara picked out a white Manish Malhotra creation and upped the look with a sleek updo, minimal makeup and jewellery. 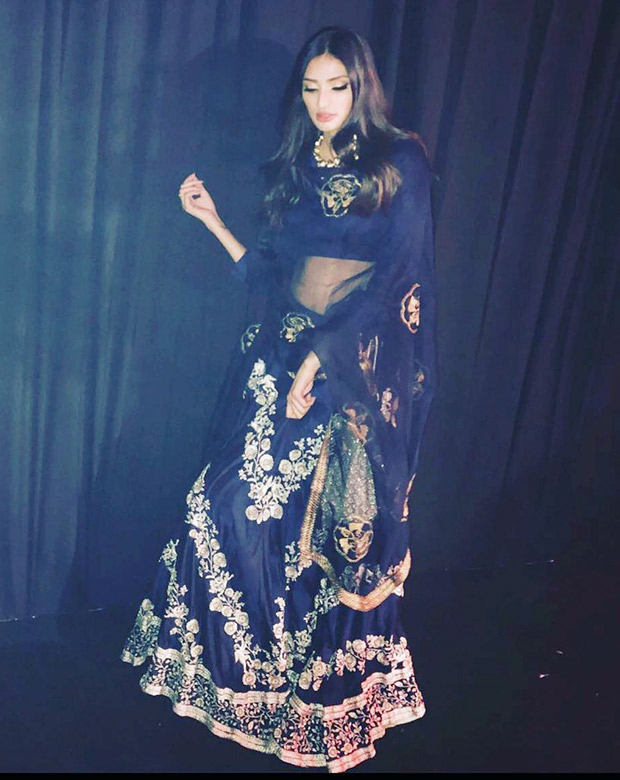 While the lovely couple took their saath pheras, the brilliant turnout of glitz, glamour and drama certainly piqued our interests and had us bookmarking our favourite looks! Do let us know your favourite ones too and stay tuned to Bollywood Hungama Fashion for more such updates.