We can totally imagine Sonam Kapoor’s entire family going…You are next…at her cousin Mohit Marwah and Antara Motiwala’s big Bollywood wedding which is happening in Dubai right now. Well, the entire Kapoor clan is present there and are perfect baraatis at the wedding. Sanjay Kapoor’s wife Maheep is keeping us updated on the entire happenings at the do. Also, there are pictures all over the net of Sonam, Rhea and their entire entourage getting wedding ready! Though the Pad Man actress looks stunning, there is little attention given to her couture and look as all eyes are on her fiancée Anand Ahuja who also is present at this family affair. 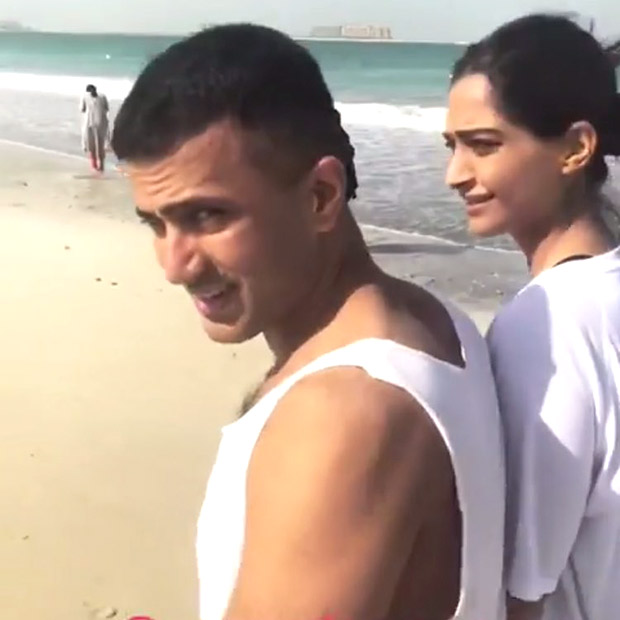 It is no secret that two have made it official and it is even touted that Sonam will tie the knot with him in June soon after the release of Veerey Di Wedding. As informed by Bollywood Hungama, Anand is very close to the Neerja actress’s family and everybody loves him including the parents in law Anil Kapoor and Sunita. Sonam too has no made no bones about hiding her relationship though she is not talking about it as yet. She also has been spotted on vacations with Ahuja on many occasions and is happy to be snapped with him.

This time around too, she sneaked out of the family function to take a stroll on the beach with Anand. Here is a picture of them together. Don’t be surprised if, following Virat Kohli – Anushka Sharma, the two get secretly married in an exotic location! Stay tuned and wait for the details. Along with Sonam-Anand, there is a rumour that this year will see another much talked about Bollywood couple – Deepika Padukone and Ranveer Singh, getting married.