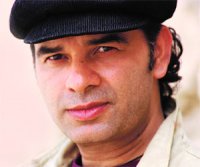 He's been having a hit-streak with his songs


The ten songs in his maiden album, Fitoor, promises Mohit Chauhan, will explore different shades, like love, travel, beauty of nature and obsession with emotions. "It's an atmospheric album. The word "fitoor" means madness bordering on obsession or the other way round," says the crooner.

Mohit does come across as a quirky persona. For someone who was lead vocalist of a pop band called Silk Route in the late '90s, he's remarkably ethnic in his Hindi, but that's because he hails from the Hindi heartland.

The singer-composer-lyricist is also a Masters in Geology if you please, no connection there however with the track that set the band rolling, Dooba dooba. "My music is about romancing with nature. I always composed songs for myself - as an expression." In the early millennium, Silk Route disbanded and Mohit took the next obvious step of composing and singing for films, starting with Main Meri Patni Aur Woh. From my songs Gooncha and Paintra, the former proved a rage. Till date, it is popular on YouTube and others have made their own videos of the same song," he lets on.

Mohit is a Ghulam Ali fan and also loves to make songs that resemble ghazals. A highlight of his career happened when a friend gave him a book of English poems written by former president A.P.J.Abdul Kalam. "I composed one called Vision just like a regular Indian song, went and met him and asked him to listen to it, and asked for permission to compose five more poems. He took me for a small and immensely memorable walk in the Rashtrapati Bhavan garden and we found we shared so much." The album came out on Ninad Music.

Despite his Indipop base, Mohit does not allow an overt Western feel in his compositions. "I have grown up on the folk of Himachal Pradesh, where I hail from and on film songs besides Western music," he explains. "I believe that the music I compose can have different languages and still retain the flow. For me, music is what naturally flows out of my mind and guitar with the words that come to mind."

Mohit's film chapter began with Pehli nazar mein with Sunidhi Chauhan, composed by Sandesh Shandilya for Road in 2001. Khoon chala (Rang De Basanti
) was among his early popular songs, but it was Tumse hi from Pritam's Jab We Met (2007) that really set him on the fasttrack. "I enjoy every song and it's a challenge too!" he says. "Hearing a song composed for me is a different high," feels the singer, whose later hits include Is this love (Kismat Konnection), Gulon mein (Sikander), Hafiz Khuda (8X10 Tasveer), Kuchh khaas (Fashion), Dooriyan (Love Aaj Kal), Masakali (Delhi-6), Toone jo na kahaa (New York), Pehli baar mohabbat (Kaminey) and Is jahaan mein (Tum Mile) with several assignments to come.

"I learn a song and internalise it, and if some natural improvisation comes to mind, suggest it to the composer," says Mohit. Now can that be the secret of his sudden success?